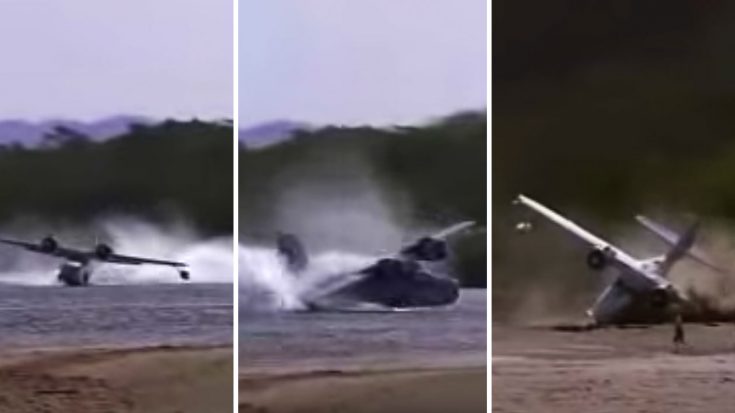 That Was A Wild Ride.

We’d like to quickly apologize in the beginning just in case we messed this up. Since the quality of this video is at 240p, it’s really hard to see exactly what type of plane this is. We’ve pulled up a picture of a Catalina and compared the engine placement, tail and rudder and as far as we could figure, that’s a Catalina. If we’re wrong and someone has another case, put it in the comment section below. Thanks!

As for the video itself, that was a pretty terrible day for somebody. However, any landing you can walk away from is a good one as the saying goes and as far as we know, no one was killed in this incident. The bird however, couldn’t be reused for a while.

That plane skidded across the water quite violently as you’ll be able to see. It took a nasty bump, went right then (probably over-correcting) went super far left until it finally hit the beach. It could have flipped over and tumbled but luckily it didn’t. Had it done so this probably wouldn’t have a happy ending.

UPDATE: Yes, we now know it’s a Grumman Goose. Thanks.