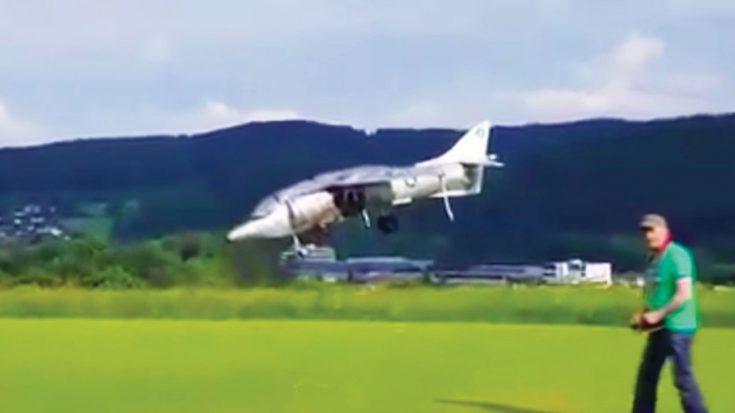 We’ve been showing you folks quite a few Rc planes in the past year. To be completely honest, we didn’t know much about them when we started, as our passion was World War II warbirds and a select few modern era jets. Ever since we showed you the first Rc (we think it was a P-47 Thunderbolt) you guys seem to like it. The rest is history at this point.

We found almost every type of Rc plane is since then. From Rc P-51 Mustangs to Rc Sr-71s that go for 300 miles per hour, we thought we’ve seen it all. Until now.

What we have here is an Rc Harrier Jump Jet. It might not be the most exciting and beloved plane ever, but Harriers are pretty cool. This one however, is much, much different.

Although we’ve seen plenty of models of this kind, none of them did what Harriers are known for, namely, V/STOL. The others were simply equipped with standard jet turbines that propelled them forward, but none of them could take off vertically like they should.

Fun Fact: The Harrier Jump Jet was originally developed in the 1960s. And though there were several other V/STOL designs in that decade, the Harrier is the only one that proved successful.

This guy in this video however, did just that. From the description we gathered that he rigged the whole system himself, and it actually works. Pretty genius, actually. Imagine how many days or weeks he spent building this – it takes more than patience to successfully assemble it. You’ll need some serious skills too. All his hard work definitely paid off.

Check it out for yourself and let us know what you think. He surely did a fine job with this – it’s one remarkable model!