Guy Takes Tank Through Drive-Thru Then Blows Stuff Up 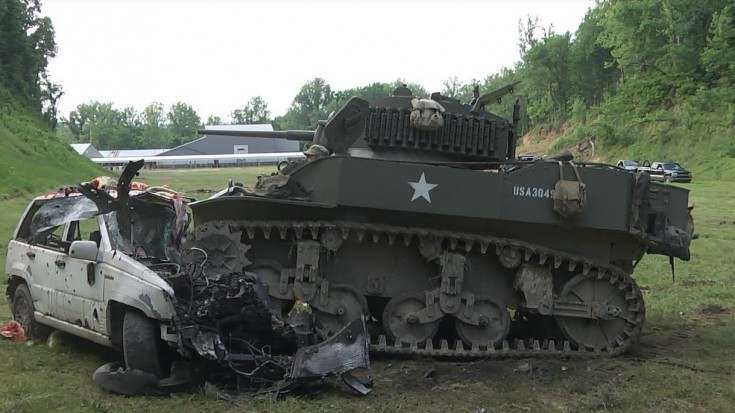 Now That’s A Job All Of Us Would Love To Have.

We are all World War II buffs for the most part, and we do love our planes. Once in a while however, we like to throw something different your way. In this little video, we found an M3 Stuart but more importantly, a guy that knows how to have fun with it.

The video is brought to you from a Youtube channel called FPSRussia. This young guy can get his hands on any weapon he wants for some reason. Be it a World War II era flamethrower or the most modern rifle, he’ll get it and he’ll shoot it. In this installment he got a tank.

These light tanks were covered in 13-51 mm armor for protection.

Equipped with a 37mm M6 at the nose, it also had 3 M1919 Browning machine guns as secondary weapons. You’ll see these bad boys tested out in this video as well. First the machine gun will mow down a brick wall. Then, for the finale, he’ll use the main gun on a poor ol’ Jeep Cherokee.

As a side note, the host of this show is not actually Russian. He was born and raised in Georgia. The Russian persona just makes it a bit more comical, not to mention that having a Russian explain weapons just sounds better for some reason.

If you like this footage, click here next to see the massive flak guns these tanks went against! They were hella powerful and scary!!