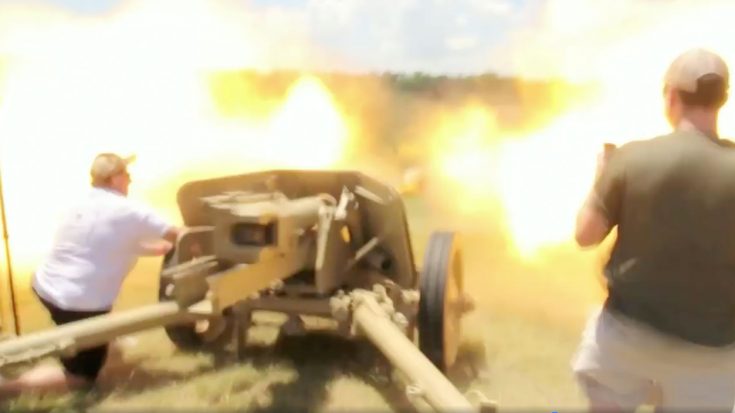 Hold On To Everything You’ve Got.

We found this video floating around on Facebook and figured that you folks would love to see a guy try to hold a blasting Pak in place. Yes, with his hands and nothing but his weight.

Let’s just say it didn’t go as he planned it.

Now, in the video, you’ll see other people shooting some massive rounds into fields and whatnot but that first clip is pretty funny. The guy got completely blown back. Well, first it was his hat. Then, he went completely backwards and managed to catch himself, but for a big dude like he was, you’ve got to know that was some massive recoil and blowback.

These 75mm Pak 40 were used by Germany, Hungary, and Finland against tanks during World War II. Designed in 1939 but then mass produced between 1942 and 1945, the Germans managed to produce approximately 20,000 of them in that short amount of time. Only about 33 exist today but the people in this killer video got to shoot off a couple rounds just for fun.

But remember. In the unlikely event you ever get to fire one or even stand near it when it’s being fired, take a step back and let someone else hold it in place if they want to.