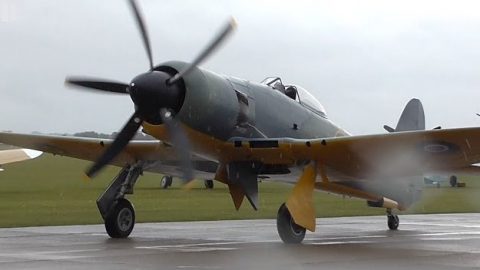 Attendees at the Duxford Airshow were treated to a rare flyby as a Hawker Fury united with an F8F Bearcat. These two planes compliment each other quite well flying in tandem amid the rainy weather conditions at Duxford.

“In commemoration of the 80th anniversary of the formation of RAF Fighter Command, the air show highlights Duxford’s role as a wartime fighter station, looks at how the nation has been defended from air attack, and shows the vital importance of fighters to winning control of the largest battlefront on earth.”

After its retirement, the Bearcat has been used in air racing events such as the annual Reno Air Races. Rainy conditions couldn’t stop the crowds from seeing these historic planes unite for an exciting airshow. See them defy the weather conditions and stun the crowds at Duxford in this clip.