Hell On The High Seas – Russia’s Only Aircraft Carrier 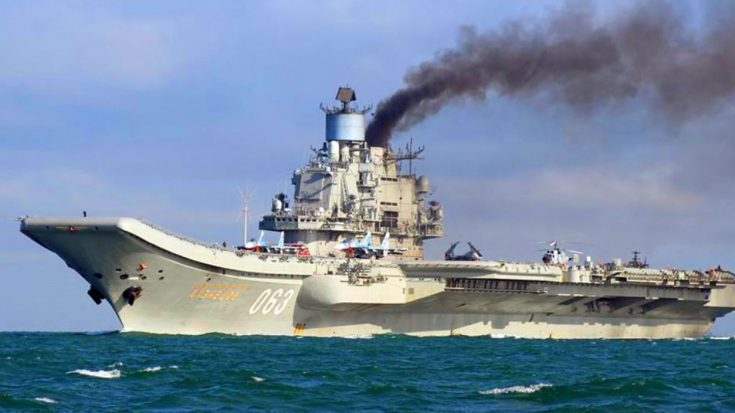 Smoke On The Water.

The Russian Navy has been making headlines ever since they left their homeland. As the fleet traveled from Russia to waters near Syria they caused widespread panic and nearly caused an international incident when it attempted to refuel in Spain. Russia’s hulking flagship may look intimidating but is it really something that we need to be afraid of?

Built in 1985, the Admiral Kuznetsov is the only aircraft carrier in the Russian Navy. This ship carries an assortment Sukhoi Su-33 and MiG-29 fighters which have been launching attacks on ISIS since their arrival in the Mediterranian. This diesel-powered carrier belches a tower of thick black smoke everywhere it goes. The smokestack this ship creates is so massive that you can see it from Orbit.

The Admiral Kuznetsov is also accompanied by tugboats everywhere it goes because the engines have been known to malfunction, its diesel engines are designed for cold temperatures and are problematic in warmer waters. The sailors onboard don’t have the highest praise about the onboard conditions either.

“If you misbehave, you’ll be sent to the Kuznetsov.”

That line is quite common among the Russian Navy personnel. Crewmen are forced into cramped living conditions, without any central heating which can even be life threatening in colder climates. In conclusion, the Admiral Kuznetsov may have a reputation for being fearsome but it’s not exactly accurate like its engine is just blowing smoke. We Are The Mighty takes a closer look inside Russia’s only aircraft carrier in this short clip.