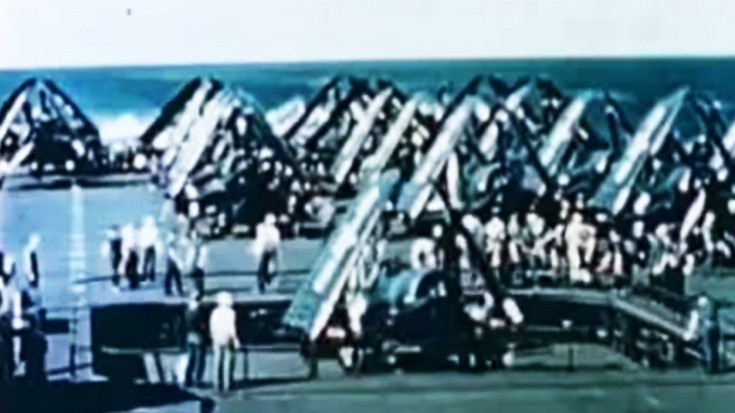 This spectacular World War II footage has been color corrected. Now, we can have a better perspective as to what the Battle of the Philippine Sea was like. More specifically, this footage was filmed during what was later named the Marianas Turkey Shoot by American pilots. In general, the Battle of the Philippine Sea was a decisive naval battle of World War II where the Imperial Japanese Navy and United States Navy faced off. Although a major naval battle, planes were heavily used to intercept enemy aircraft coming in to sink ships on both sides.

The Battle of the Philippine Sea was the largest carrier against carrier battle in war history!

As you’ll see, hundreds of American Hellcats, Avengers and Dauntless were sent out to intercept the incoming Japanese Zeros and to destroy the Imperial Japanese Fleet. Once engaged, it was apparent that America’s new aircraft technology, training and experience was far superior than the Japanese. In two days time, the Japanese lost over 600 aircraft, 3 of their biggest carriers and 8 other vessels. On the U.S. side, one battleship was damaged and 123 aircraft were destroyed, although most were lost due to fuel starvation forcing the pilots to ditch into the sea.