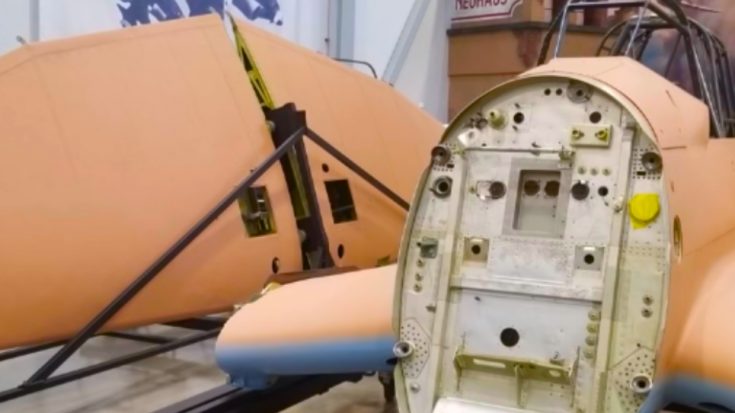 Why is that exciting, you ask?

Because there’s a Ju-87 R-4 Stuka on display. And it’s not just there to be looked at as is; it’s being restored right there on the museum floor.

This particular Stuka is destined to be the world’s first airworthy restored Stuka. Just three of its kind can be found today.

So far, they’ve put fresh paint on the fuselage and wings and added some landing gear. Though in pieces right now, it should be up in the air by 2020. Many of the parts will be shipping in from Hungary.

Now we begin the countdown until we hear the sweet roar of that Jumo engine and those iconic bone-chilling sirens. That’s definitely something to look forward to!

The video walk around the Stuka reveals glimpses of its rich history. Built in 1941 and originally intended to serve in North Africa, you can see the tan factory paint in the color layers of the fuselage if you look closely. However, this Stuka was instead sent to the Eastern front along the border of Finland and Norway.

Shot down in 1941, the Stuka was left in the woods until the early 1990s until it was shipped to England by a private collector. It was then sent to Germany and, finally, to its home at the Flying Heritage and Combat Armor Museum where it has been since 2013.

It’s about time we get an airworthy Stuka! A truly iconic dive bomber, this bird was able to drop vertically from 15,000 ft. at crazy speeds to unload its bombs with stunning accuracy. But most of all, it’s the scream of the “Jericho sirens” that have burned the Stuka into memory.

As terrifying as those sounds once were, how cool is it to be getting to have one of these flying again.

Check out the most recent update on the project in the video below.