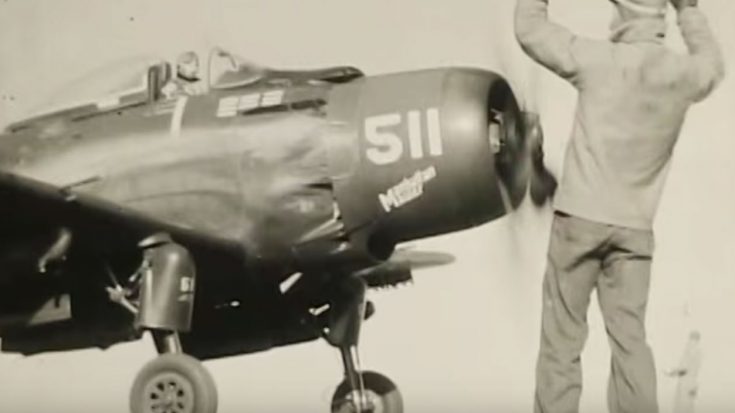 The Korean War, fought between 1950 and 1953, was a hot war which resulted from the Cold War between the United States and the Soviet Union. With the peninsula falling to communism, the U.S. and its allies supported what is now South Korea to uphold its democracy. The end result was the country being split in half as it is today.

As in World War II, air warfare was widely used to ensure victory. From bombing raids to close air support, aircraft were deployed to gain an advantage on the battlefield and although the jet age just began, a lot of World War II propeller-driven aircraft were used.

In the historical clip below, you’ll see A-1 Skyraiders (which were introduced right after World War II) landing on USS Bon Homme Richard.

This Essex-class aircraft carrier was built to be used during World War II and decommissioned soon after in 1947. As post-war tensions grew, she was recommissioned again in 1951 and served in the Pacific during the Korean War and the Vietnam War.

Known as “Spad” and “Sandy,” the A-1 Skyraider was built as an attack aircraft for World War II but was not completed in time for the war. Although a piston-powered propeller-driven aircraft, it enjoyed a successful career so much so in fact that over 3,000 of them were produced.

Able to fly over 320 mph, it was armed with 4 20 mm autocannons and could drop ordnance using its 15 external hardpoints. It was definitely a force to be reckoned with.