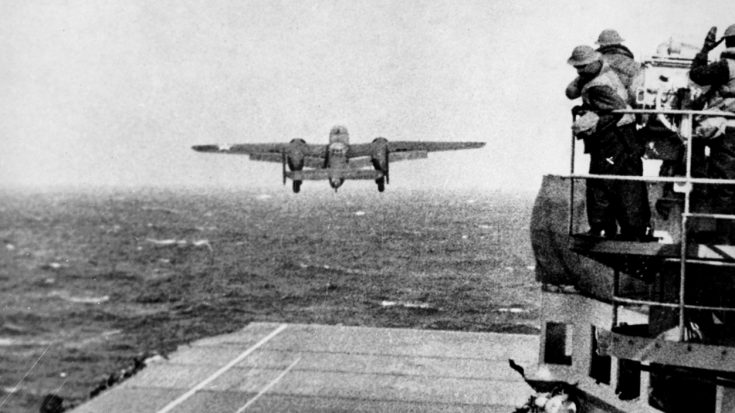 The Commemorative Air Force did something pretty neat on the anniversary of the Doolittle Raid. While the April 18, 1942 was top secret until after the fact, in 2019 we got to see the events unfold on Twitter in real time with the exact intervals of time between what happened!

In honor of the anniversary of the Doolittle Raid and the memory of Dick Cole, we’ll be tweeting the Raid in “real time” on April 18. Not *actual* real time because we’re posting on EDT since most of our audience is in the US, but the intervals will be correct. pic.twitter.com/1ksgrBEGPr

At 0310 a radar operator aboard Enterprise detects two ships 21,000 yards off the port bow. Halsey orders all ships to General Quarters and changes course away from them. #DoolittleRaid

At 0341 radar operators report the Japanese ships were no longer within radar range. The change in course has put the task force two hours and forty miles behind. #DoolittleRaid

At 0715 one of the patrol planes drops a message that it has spotted a Japanese ship and probably been spotted in turn. #DoolittleRaid

At 0738, while the task force was still about 650 nautical miles from Japan, it is sighted by Japanese picket boat No. 23 Nitto Maru, which radios an attack warning to Japan. #DoolittleRaid pic.twitter.com/CZCWUwhWQA

Ugaki directs his forces to points 300 miles off the coast anticipating the launching point for USN aircraft. The Japanese have not planned for longer range US Army bombers to be used. #DoolittleRaid

At 0800 Halsey issues orders to launch. Flashed by blinker from Enterprise to Hornet: “LAUNCH PLANES, TO DOOLITTLE AND GALLANT COMMAND: GOOD LUCK AND GOD BLESS YOU, HALSEY.” #DoolittleRaid pic.twitter.com/OwJaFXpNG0

At 0825 the first of 16 modified B-25 Mitchells, flown by Doolittle and Cole, lifts off from Hornet and heads for Japan. #DoolittleRaid pic.twitter.com/4mOdL01H3D

At 0919 the last of the 16 modified B-25 Mitchells lifts off from Hornet headed for Japan. #DoolittleRaid pic.twitter.com/nDpg9Q72Um

At 1030 Japanese patrol planes are ordered to scout the waters east of Japan as far as 600 miles out. A strike force of 32 medium-bombers, escorted by 12 Zeros, is also sent east. Bad weather causes them to turn back to Japan. #DoolittleRaid

At about 1200 Tokyo Time (1300 Task Force time), B-25s begin bombing 10 military and industrial targets in Tokyo, 2 in Yokohama, and 1 each in Yokosuka, Nagoya, Kobe & Osaka. Some B-25s encountered light AA fire and a few enemy fighters, but none are shot down. #DoolittleRaid

At 1345 radio broadcast from Tokyo intercepted by Enterprise: “A large fleet of enemy bombers appeared over Tokyo…” Exaggerated damage and casualty report gets past Japanese censors and was first indication that raid was a success. #DoolittleRaid

By afternoon, 15 of 16 aircraft proceed across the East China Sea toward China. One B-25, piloted by Captain Edward J. York, extremely low on fuel, heads instead for USSR rather than be forced to ditch in the middle of the East China Sea. Crew is interned. #DoolittleRaid pic.twitter.com/YP6OCUcG29

As night approaches, fuel runs low, and weather deteriorates, crews realize they will not be able to reach their intended bases in China, leaving them the option of either bailing out over eastern China or crash-landing along the Chinese coast. #DoolittleRaid

All 15 remaining aircraft reach the Chinese coast after 13 hours of flight and crash-land or bail out. #DoolittleRaid

Of the 80 airmen, 69 escaped capture or death, with three killed in action, and four in captivity. Though bomb damage isn’t significant, the Raid is a psychological victory and puts Japan on notice their homeland is vulnerable. #DoolittleRaid

*We will update this article as tweets are added.