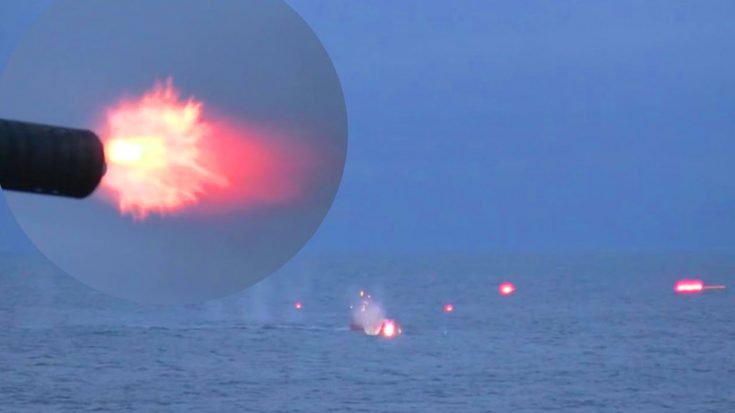 Making its debut in the early 1990s during Operation Desert Storm the MK-38 is the best naval defense around. Designed to protect naval vessels from high-speed boat threats the MK-38 implements the Phalanx Close-In Weapons System (CIWS) to gun down targets before they come within attacking range. The gun locks on to invading targets with deadly accuracy and fires 25 mm rounds at a rate of 4500 rpm.

“The 25mm Machine Gun System (MGS) Mk-38 is a 25mm automatic gun system that provides ships with a defensive and offensive gunfire capability for the engagement of a variety of surface targets. It is designed to provide close range defense against patrol boats, swimmers, floating mines, and various targets ashore including; enemy personnel, lightly armored vehicles and terrorist threats. One crewman is required for operation and two for maintenance.”

The crew aboard the Amphibious Assault Ship USS America (LHA 6) give a demonstration of how effective this gun is when the situation arises. In this video, you can see the gunners take aim at invading boats near the USS America and shoot them down the with greatest of ease.