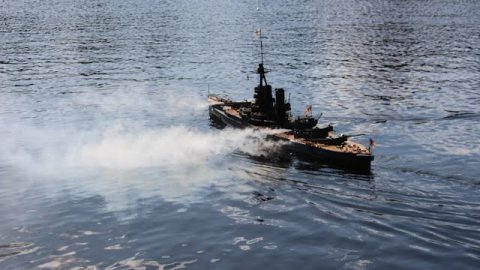 The HMS Iron Duke was the flagship of the grand fleet between 1914 to 1916. It was Jericho’s flagship at the Battle of Jutland in 1916, which did serious damage to a German battleship six times in as many minutes.

A miniature model was built was Geoff Dixon which he brought with him at the Model Boat Mayhem meeting at Wicksteed Park. It’s approximately six feet, six inches long, and weighs 60 pounds. The miniature ship also had five turrets, all of which turn under radio control, and then stimulate gunfire.

The number of shots it can fire is limited by its battery capacity. However, typically, it produces 65 to 72 salvos in a session, which is around 300 to 350 shots. This amazing model took four and a half years to build!