How Did This Nazi Forest Go Unnoticed For So Long? 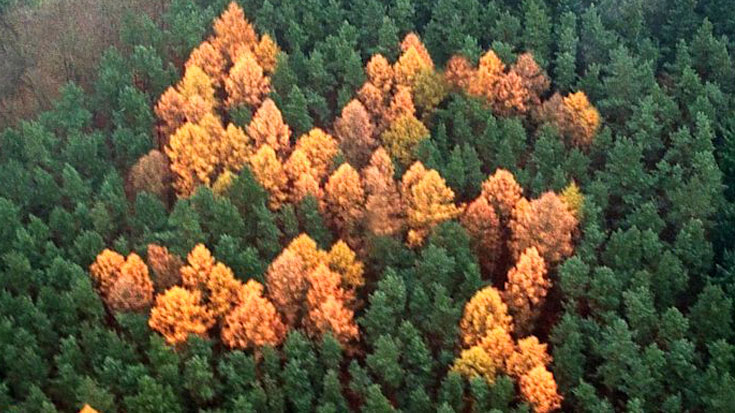 Adolf Hitler expected the Third Reich to endure the test of time for 1000 years but that didn’t turn out as planned. The Nazis decorated Germany’s architecture with swastikas and symbols of their military regime throughout their short-lived reign. As the Allied Forces usurped control from the Nazis, they went ensured that their symbols were scrubbed from the nation but there were a few that were missed such as a giant forest swastika.

This all came about in 1992 when an employee of the German Government was conducting an aerial survey of a forest. As he flew overhead he took pictures of a ground of some 100 trees that formed a swastika. Which leads to the question, how does such an obvious mark of Nazi Germany go unnoticed for the better part of half a century?

There are a number of reasons why the forest did not come to attention for all of those years. One of the factors is that the swastika is made of larch trees which have leaves that turn yellow for a short period of time, otherwise, they would return to green and blend in with the forest. The other reason why it was overlooked is that no one could look over the area. This forest was only visible by planes and private air travel was restricted over this area while it was occupied by the Soviet Union.

The German Government feared that the forests would become a new haven for Neo-Nazis, so they ordered their destruction. The origin of the forest is still in despite among historians, however, it was likely planted in the 1930s during the rise of the Nazis. There have been other Nazi forests discovered through the years, this video dives a little more into their history.