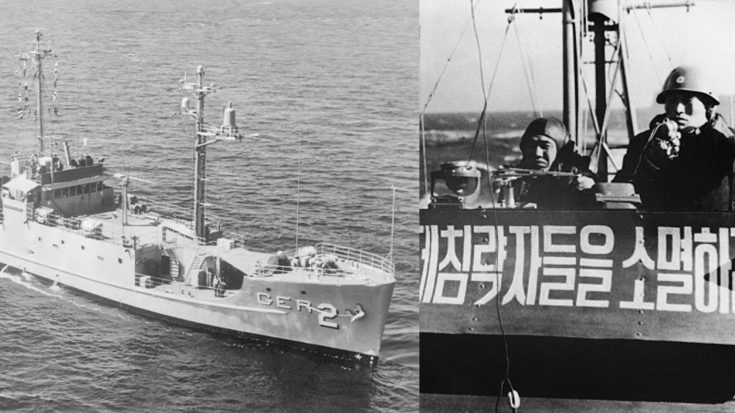 Vessels of the United States Navy have a proud history and success in keeping the world safe. It is hard to believe that one of these ships was actually captured by enemies nearly 50 years ago. So how did USS Pueblo end up in the clutches of North Korea?

In January of 1968, the USS Pueblo was on a mission to survey on the Soviet Union’s Red Navy. As the USS Pueblo traveled through the Sea of Japan it was ambushed by a North torpedo chaser and patrol boats. The North Korean vessels fired upon the USS Pueblo even though it was well within international waters and had no weapons armed at the time.

North Korea insists that the Pueblo was within the range of their coastline, but there is no evidence to support this claim. After agreements violating international waters, the ship was boarded and the crew tied up, beaten and taken back to North Korea. They remained in POW camps for some time where they were tortured and subject to psychological torment until their release nearly a year later.

Two innocent sailors died and tensions between North Korea and the United States have never gotten better over the years. To this day the USS Pueblo remains the only US vessel that remains captured, and it currently serves as a museum in North Korea commemorating the incident.