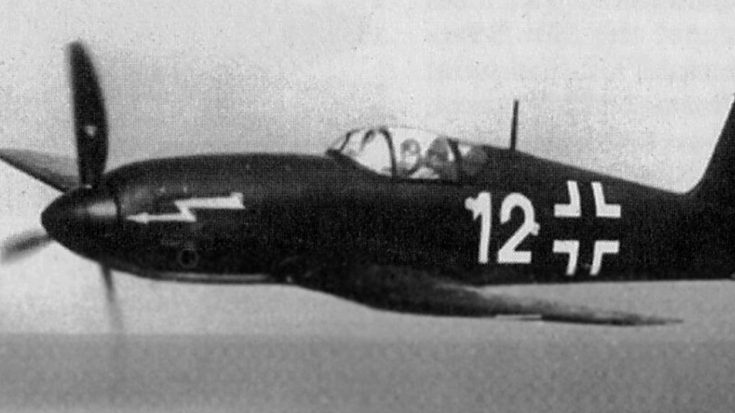 The German Luftwaffe was a force to be reckoned with during WWII and the Bf 109 stood as their foundation. Although the Messerschmitt Bf 109 was the mainstay of the Luftwaffe it was challenged occasionally for the supremacy. The Heinkel He 100 challenged the Bf 109 for the cornerstone of German air power but never came to fruition. So what happened to the mysterious Wunderwaffe that is the He 100?

Famed German engineer Dr. Ernst Heinkel had a reputation for creating bomber aircraft and entered a competition to create a next great fighter for the Luftwaffe. He lost the competition but was not discouraged by failure and sought to create a fighter that would exceed the capabilities of the Bf 109.

Heinkel got to work and created the He 100, which was the fastest fighter in the world when at the time of its development. The plane placed an incredible emphasis on speed and drag reduction setting a world speed record of 394 mph.

Ultimately the He 100 developed issues from heating which were countered by a very intricate cooling system within the wings. Water would circulate through the wings and the He 100 would suffer from overheating issues is any bullets scored a hit. So the He 100 went in a propaganda role disguised and the Heinkel He 113 to inspire fear into enemy air forces.

The He 100 was never given a full armament other than a few machine guns. Given the opportunity, it may have been able to outperform the Bf 109, but sadly the plane never entered a full production run nor do any units survive to this day. Bismarck has put together a film detailing the life of this remarkable plane and why it never joined the Luftwaffe.