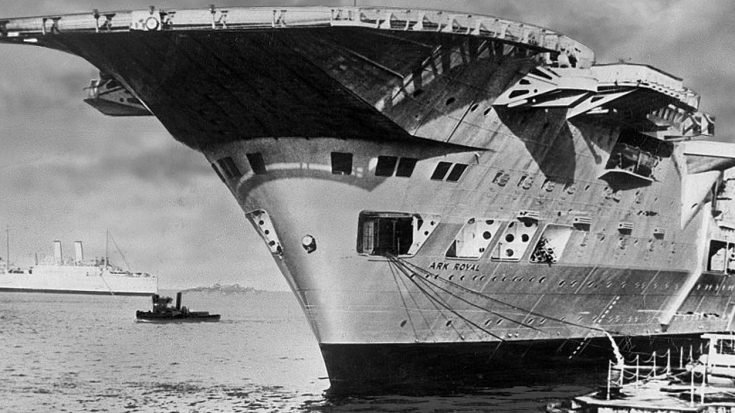 After WWI it became clear that massive battleships were getting outdated in naval warfare and aircraft carriers were the way of the future. The Royal Navy had no problem getting on board with this idea and began introducing aircraft carriers into their fleet. One of the proudest vessels to serve the Royal Navy in WWII was the gigantic HMS Ark Royal.

Laid down in 1935 the HMS Ark Royal was a game changer for the Royal Navy. Most aircraft carriers simply had decks built onto the superstructure but the HMS Ark Royal became was the first vessel to have a hangar and flight deck integrated with the design. These features revolutionized naval vessels and shortly after other nations followed suit with their aircraft carrier designs.

This ship really got around, serving in conflicts in several areas including the Mediterranean and as far north as Norway. The HMSArk Royal earned its place in history when it took on the daunting challenge to take on Germany’s most powerful battleship, the Bismarck. This carrier could hold up to 60 aircraft, most of them outdated Fairey Swordfish torpedo bombers. But these older biplanes flew slower making it much more difficult for the Bismark to land hits. In a twist of fate, one of the biplanes managed to launch a torpedo into the Bismarck’s rudder, crippling the massive vessel.

Unfortunately, the HMS Ark Royal was not long for this world and was eventually destroyed by a U-boat strike off the coast of Gibraltar.

The following clip includes archival footage of the HMSArk Royal in its heyday.