Huge RC B-25 Almost Crashed On Both Approaches, But Then Crashed Anyway 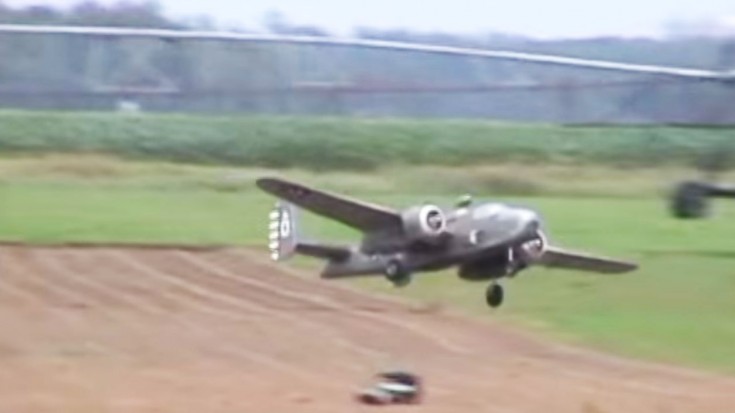 Three Time’s A Charm, But Not This Time.

Jeff Quesenberry from Owatonna Minnesota is not your average guy. He has a solid passion for not only Rc piloting, but building exquisite World War II warbirds. In this video, he flies his gigantic B-25 Mitchell, having a massive F4U Corsair and other planes as well.

Although a seasoned flier and skilled builder, you can’t always be a winner. In this video, he lost one of his babies due to a mechanical failure which is not exactly his fault.

In the beginning of this video you’ll see the massive Rc with your own eyes. It’s big, it’s beautiful and then it takes off without a hitch. On first and second approach to land however, it gets a bit windy and Jeff almost loses it. But no, he powered her up and went for another approach.

While pitching up and trying to go around for another attempt, she just gave out. Apparently the left propeller was rubbing on the nacelle and caused it to break off. Then she literally fell out of the sky. Sad, but it’s bound to happen in a long career like that.