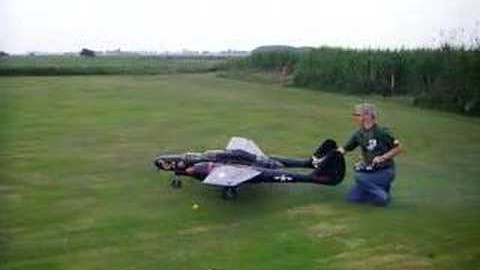 This big RC plane is modeled after The Northrop P-61 Black Widow. It was the first war bird specifically designed for night fighting and radar use. It has a twin-engine, twin-boom design. This aircraft can operate even in total darkness and it’s nearly invisible because of its jet black paint finish. It was something that ground-based searchlights couldn’t easily spot!

It was armed with four 20 mm (.79 in) Hispano M2 forward-firing cannons mounted in the lower fuselage, and four .50 in (12.7 mm) M2 Browning machine guns mounted in a remote-controlled dorsal gun turret.

This “Lady In The Dark” is looking sharp and that sound of her roaring engines is incredibly beautiful. This is one badass model plane! It’s a fine work of art. It may not look as gorgeous as the Corsair but it’s still a thing of beauty. This video just gave me some serious envy. This is what dreams are made of!