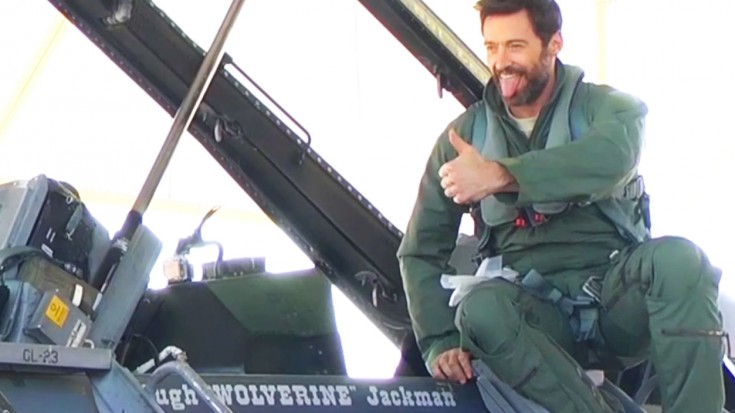 That’s An Awesome Treat And He Knows It.

You don’t get a chance to fly an F-16 Fighting Falcon all that often, but when you do, you take it. This is exactly the honor that Hugh Jackman was given and he took it without a second thought.

While promoting his new movie Eddie The Eagle, he and others involved in the movie went over to the Naval Air Station Forth Worth Joint Reserve Base to give everyone a private showing of the movie. We’re not sure if it was planned or if it was just something that came up in conversation, but Jackman was given the opportunity to go up with one of the pilots.

“Having this opportunity to go out there in a fighter jet…this is kind of a dream come true…I’m a little nervous but yea, I’m fully aware of how lucky I am to have this opportunity.”-Hugh Jackman, star of Eddie The Eagle

He was briefed on what to do (not pulling the ejection handles was one of them) and was geared up and ready to go. We found some footage of his interview before the flight as well and he admitted of being a bit nervous. At the end though, he respectfully thanked everyone for the flight and making his dream come true.