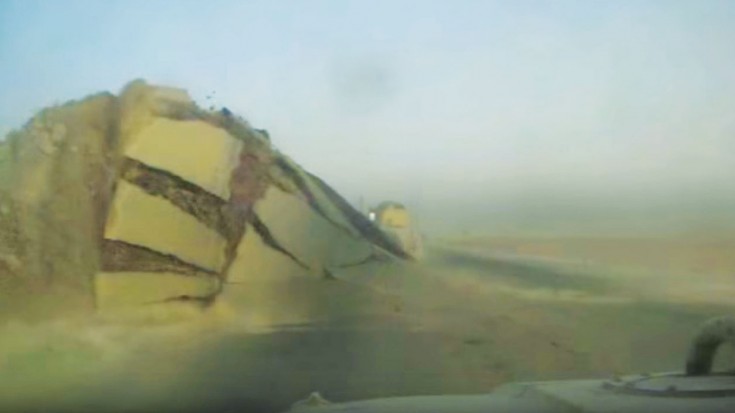 This is an oldie, but it’s definitely worth a watch. Uploaded in 2007 to Youtube, American troops in the Middle East recorded something that seems like would only belong in a movie. Also, they nearly recorded their own demise.

As part of a convoy, these soldiers were practically in the middle of nowhere when all of the sudden the ground shook and opened up right in front of them. The quick reflexes of the driver avoided collision with the debris, something that could have caused some bodily harm as well.

Aside from this being an incredible story of luck and survival, the explosion itself was quite eye opening too. You can literally see the asphalt get lifted up by the explosion, break up into slabs, then pieces and thrown about 15 feet into the air. Can’t imagine what the hell that would have done to the Humvee and of course, its occupants.

We’re speculating here, but it does seem like those dumb terrorists contributed to the happy ending of this story. They either buried the explosives too deep or didn’t use enough of them. Either way, this could have still been really bad if they got that right. Then, there’s the timing. A bit of a premature explosion if you may.

All in all it was a good day for our guys. Keep up the good job and stay safe.