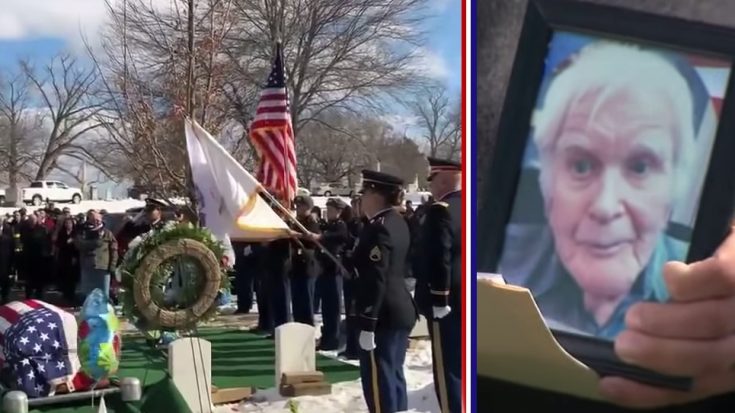 James McCue passed away on February 7th, 2019. At 97 years old, the highly decorated U.S. Army veteran had no surviving family members. With the funeral just days away, Massachusetts Veterans’ Services Secretary Francisco Urena sent out this tweet inviting community members to the service:

James has no surviving family to witness the Military Funeral Honors. Community members are asked to attend his services. pic.twitter.com/QwSYWg9eGQ

The locals of Lawrence, Massachusetts gave an overwhelming response. Hundreds came to stand in the snow to pay their respects on February 14th. The fact that it was Valentine’s Day only seemed to make the ceremony even more special.

The Lawrence Police Department even shared photos of the massive crowd on their Facebook page and many veterans also attended.

Thank You to all who traveled the distance to witness the Funeral Honors for WWII @USArmy Vet James McCue.

Please get to know a Veteran of any era, especially WWII, Korea & Vietnam while they are still amongst us. Say Thank You for your Service as a start of a conversation…?? pic.twitter.com/muUFU4mNdo

As Urena stated in his tweet, McCue served and excelled in five major battles during the war. Urena’s hope was that the event, in addition to honoring the American hero, would be a teaching moment for younger generations. May we never forget the sacrifices of our veterans. May we strive to be worthy of them. May we cherish those we have left.

From the looks of it, the message hit home.