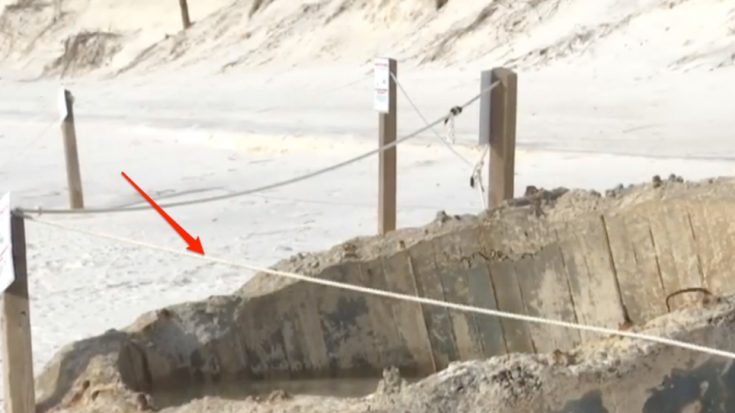 For 77 years, storms have blown about the sands of St. Andrews State Park near Panama City Beach, Florida. The landscape has changed some, but otherwise, not much has happened there.

But then Hurricane Michael happened.

Thanks to the powerful winds of Hurricane Michael, a 77 year old gun mount is the most visible it has ever been.

When the U.S. entered the war, the harbor already had big guns, but it didn’t seem like enough.

The area had become part of an important shipping channel in the 1930s. For good measure protection against German ships, the 4 gun mounts known as the Panama mounts were placed along what is now St. Andrews State Park.

They Weren’t Operated For Long

That was in 1942-43. Since then, and after only 9 months of operation, the gun mounts have disappeared beneath the sand for the most part. The National Park service said of the reveal that they knew all along that the gun mounts were there, but had never been sure exactly where.

The concrete mounts were made to be fitted with 155-mm field artillery guns. The guns themselves would have had nearly 20 ft long barrels and 10 miles of range. That seems pretty darn good, but they would have only been effective against smaller warships.

The east coast threat never did materialize. However, it’s nice to know that protection was there.

Check out the video below of people enjoying the rare site.