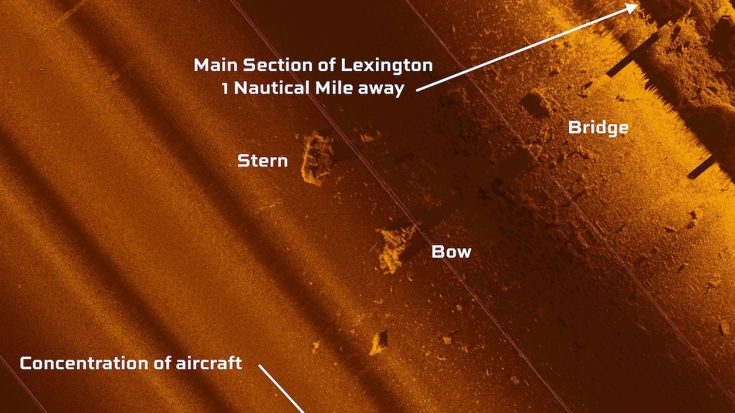 Many details have been emerging about the sunken wreckage of the USS Lexington after its recent discovery. 76 years have passed since the legendary carrier sank beneath the waves and many unanswered questions remain. The first high-resolution scan of the debris field surrounding the USS Lexington has emerged and it gives some interesting clues.

The area covers roughly have a mile of seafloor which features segments of the carrier and some of the aircraft. Over 30 aircraft were stationed on the USS Lexington although only 11 have been found in the current phase of the search.

“This mosaic of High-Frequency sonar images covers the debris field of the Lexington CV-2. It gives the general layout of the wreck site with the main portion of the ship approximately 1 nautical mile away from the bow and stern sections.”

The search results are relatively new and there is still more area to scan and to explore with submersibles. So far the remains of the aircraft have been remarkably well-preserved and the discovery of a torpedo which targeted the carrier but failed to detonate. This video from National Geographic displays some of the latest imagery from the wreck with some interesting facts.