Imagine Driving Down The Road When All Of The Sudden… 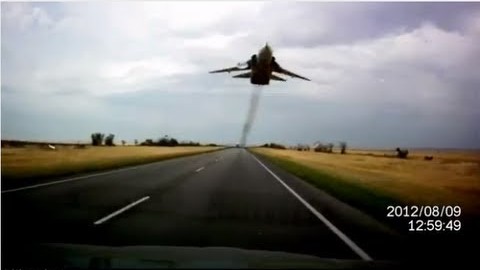 Now That Would Have Scared Anyone!

We can seriously thank the Russians for some of the most viral and amazing videos that trend on Youtube due to their dash cameras. We’ve actually researched why this phenomena exists and the reason is pretty simple. According to Wired’s article from a few years back, ‘the sheer size of the country, combined with lax-and often corrupt-law enforcement and a legal system that rarely favors first-hand accounts of traffic collisions has made dash cams all but a requirement for motorists.’ As a result, Russians have captured everything from terrible car crashes to a massive meteor falling through the sky. In this video, we’ll see something that’s right up your ally.

While using the above mentioned equipment, a couple driving down a rural road captured something you’d probably not see outside of Russia (for the most part.) Minding their own business on a straight stretch of road, they start speaking as if they see something in the distance. Then you can see a little dot in the distance that within seconds turns out to be an Su-24 which shakes the entire vehicle. The woman in the car screams, which is more than understandable. If it happened to you, you’d probably do the same.