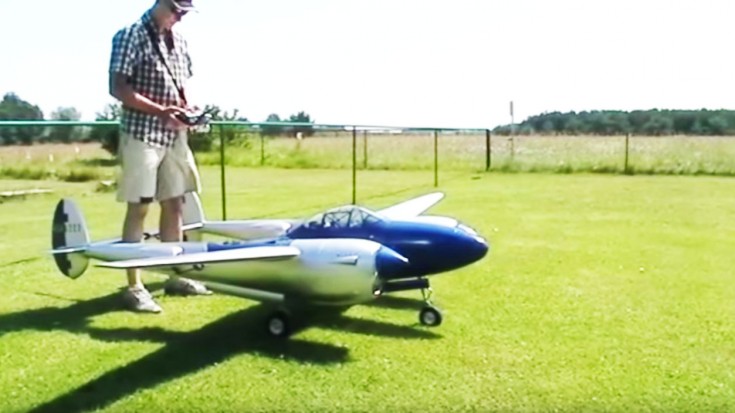 That Looked Scary But It Turned Out Alright.

This is one of the biggest remote controlled P-38 Lightnings we found on the web. Built by a hobbyist from Germany, this impressive warbird sounds like a charm. At 1:5 scale, the wingspan of this Lightning is just over 10 feet. In addition, this baby is powered by two DA-50 engines with 50 cc displacement per unit. It sounds pretty fantastic if you ask us.

This plane even features retractable gear and brakes!

As for the aircraft of choice, we commend the owner/builder for choosing a P-38. Originally built in 1939, these fighters were so effective that Lockheed built over 10,000 of them. They were the only American fighter plane to be produced throughout World War II and rightfully so.

The two top American aces flew P-38s. These are Richard Bong with 40 victories and Thomas McGuire with 38. They both flew in the Pacific Theater of Operations where the Lightnings were most successful.

Escorting bomber squadrons over the the Pacific, their excellent range of 1,300 miles made them the perfect protectors. Highly maneuverable and fast, they shot down nearly 2,000 Japanese aircraft during their service.