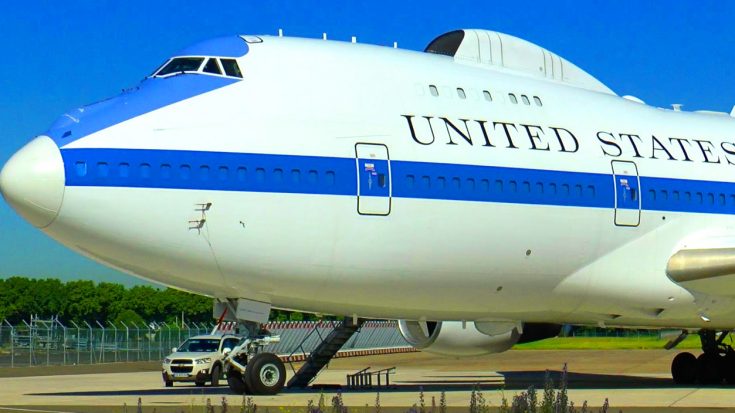 The United States of America deals with many threats in many forms, but that if you want to kill the body you just need to cut off the head. Leadership positions are more likely to be targeted so the President practically has a bullseye painted on. For that matter, all the most intense safety measures must be taken to protect the Commander-In-Chief including travel. In the direst of situations, the security of Air Force One might not cut it so that’s where the President’s Doomsday Plane comes in.

The Doomsday Plane is officially known as the Boeing E-4 Advanced Airborne Command Post. The E-4 is a highly modified Boeing 747-200B which can easily be called the most secure plane on earth. The planes with the Air Force One designations are intended for comfort and safety of the President, while the Doomsday Planes are fully functional war rooms.

“In operation since the 1970s, these airborne command posts were long considered the best chance for a Cold War president to survive a nuclear attack. Unlike the ceremonial and comfort-focused Air Force One, the E-4B airborne command posts are flying war-rooms—staffed by dozens of military analysts, strategists and communication aides who would guide the president through the first days of a nuclear war.”

One of the most noticeable features of the Doomsdays Plane is the hump on top of the plane called a “Ray-Dome” holds 67 satellites systems to stay in constant communication. The E-4 holds the most modern features and also has older communication technology dating back to 1924, which is less susceptible sabotage or malfunction in the event of an electromagnetic pulse.

National Geographic was given an exclusive tour of the Doomsday Plane and how it would function if the world went to war that you can view in this clip.