Incredible Air-To-Air Video Of A Corsair And Mustang 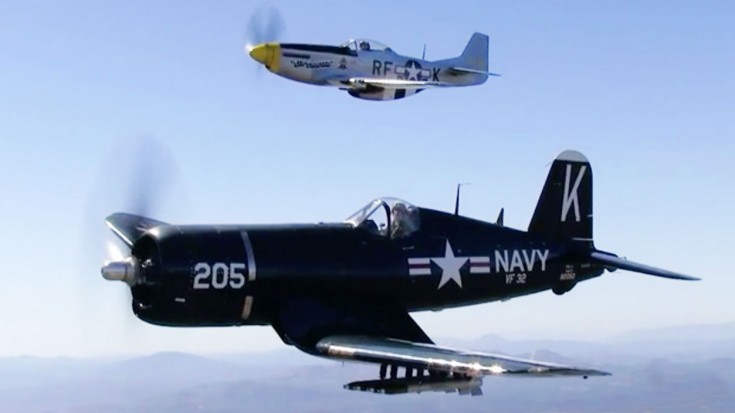 This spectacular video was shot in Ramona, California by the talented videographers at AirShowVid.com. Captured with a HD camera, the video features two of the most famous fighters of World War II, namely, an F4U-4 Corsair and a P-51 Mustang named Six Shooter. The video has the perfect blend of music and engine sounds, although we know that most of you would prefer just the engine music. Either way, immerse yourself in this beautiful montage and enjoy!

Filmed in 2013, this was the first time a Corsair and Mustang were shot from that vantage point.

Six Shooter is owned and operated by Chuck Hall and is housed at the Ramona Airport in San Diego County. It has been part of the USAF Heritage Flight Team for a decade and is still shown in the airshow circuit. Chuck Hall is an aviator who has been flying since the age of 19. From Boeing 747s to helicopters, Chuck can fly almost anything.

The Corsair is owned by Doug Matthews. An aviator as well, Doug comes from a military family. As a teenager, he spent most of his time washing planes and teaching people how to fly them once he got his own license. He joined the Navy to be able to fly from carriers, and quickly climbed the ranks to became one of the most decorated Ensigns in the Navy. It’s no wonder then why he chose to fly the Corsair during this shoot!

The F4U-4 Corsair “The Whistling Death” from AIRSHOWVID.COM on Vimeo.