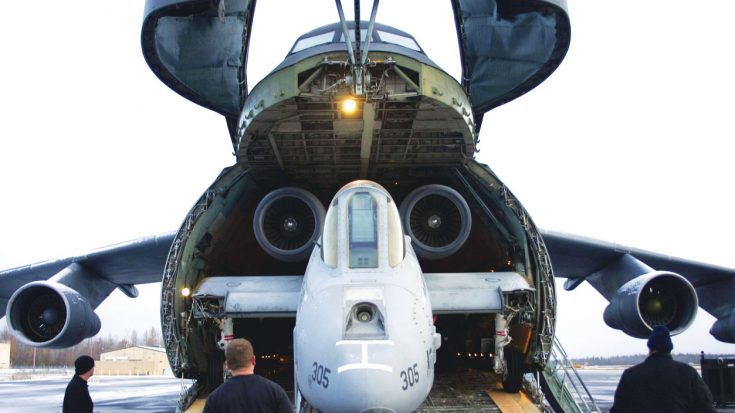 Although initially quite a disaster, Lockheed’s C-5 Galaxy has become one quite the heavy lifter for the United States Air Force. Although the initial development was plagued with cost overruns as well as structural issues, it’s upgraded version, namely, the C-5M Super Galaxy is expected to be in service until 2040.  After taking care of its growing pains this platform turned out to be one of the most successful transport aircraft ever built.

First introduced in the 1970s, the C-5 Galaxy was designed to relieve some of the transport duties of the C-130 Hercules fleet and also be able to fit much larger cargo. That why you’re here. To see what in the world can you fit in this beast. Able to liftoff with a payload of 270,00 pounds, you can fit an airplane inside this plane.

Don’t believe us? Just take a look at these pictures.

7. How About The Biggest Transport Helicopter?

Here’s a funny one. One of Marine’s biggest transport helicopters is the CH-53 Sea Stallion. This thing is a beast all onto its own. Developed in 1966, it was designed to be a heavy transport helicopter for moving troops. It can as a matter of fact, load up to 55 troops in addition to a crew of 6.

For comparison, it’s 25 feet tall and 88 feet long weighing in at 32,000 lbs. Still, it fits nicely in a Galaxy when folded up for shipping. How crazy is that?

At the same time though, the next picture will show you how it can handle some serious weight.

Although not big (relatively speaking as compared to fitting an actual plane in there), tanks can easily fit into a C-5 Galaxy. Not just one, but two actually.

What you see here is an M1 Abrams. These tanks have been produced since the 80s and over 10,000 of them have been made to date. At about 32 feet in length with the gun forward and 12 feet wide, two of them can fit in the cargo bay of the Galaxy. The weight is really what makes this feat incredible.

These tanks weigh over 60 short tons. That’s an equivalent of over 120,000 lbs. Now let us repeat it. The Galaxy can carry two of these.

Here’s something different. Water craft are an integral part of our military, but unless it’s a huge ship that can travel thousands of nautical miles on its own, you’re going to need to get it to the fight. The Galaxy has no problem with that either.

What you’re seeing here is a Mark V SOC (Special Operations Craft) and is part of the United States Naval Special Warfare Command. Its main purpose is quick insertion and extraction. They were used both in Iraq and Kuwait and guess who got them there. Yup, C-5 Galaxies.

4. Non-Military Equipment Is Fine Too. Here’s A Frickin’ Semi.

Maybe not military, but this one you can actually comprehend on your own if the picture is not enough. This here is a semi truck. The kind you see on the road. When you drive by them, you look at them and think, “Holy crap! This thing is huge. I better pass it before it pins me against the guard rail and I’m donezo.” At least that’s what goes through our minds.

The point here is that you know how massive and long these things are. Yet, you can park one in this behemoth of a plane, fly it to its destination and drive right out. Pretty impressive if you ask us.

Now this one tops it all. Like we stated in the opening paragraph, C-5 Galaxies were designed in part to ease the load of C-130 Hercules transport planes and also to be able to haul bigger items. It’s like getting an personal assistant at work. It’s nice, but what if they do the job better than you? Like…much better?

Now imagine that person just completely took over. Now that’s humiliation, as is this case. Here’s the fuselage of a C-130 being pulled out of a C-5. If the Hercules could talk, it would say, “Please, turn away. Don’t look at me.”

When you stand in front of a C-130 Hercules, you realize how big that thing really is. The height of the Herc from wheels to top of the fuselage is over 38 feet. Now, that same cockpit fits inside the cargo bay of a Galaxy. Then there’s the cockpit on top. That’s pretty insane.

The next picture is our favorite though. Although smaller than the C-130 Hercules, these planes are the [email protected]$$es of the sky. They offer CAS like no other plane and apparently can hitch a ride on a C-5 too.

1. This Is Our Favorite One. How About Delivering A Can Of Whoop- A$$ Right To Your Door?

Last but not least, a C-5 gives birth to our beloved A-10. Mind you, the wings are off of course, but it sort of puts the size of the Galaxy into perspective.

14 feet high and over 53 feet long, the Warthog fits into this fuselage like a glove. Just look at the A-10’s engines. They’re wall to wall. Like we said. Fits like a glove.

The only thing we can’t understand is why would it get transported like that. Possibly because it was out of commission now that we think about it. If not, that’d be a waste. We’d rather be flying an A-10 and scaring the crap out of people on the ground with that whine. Dreams…