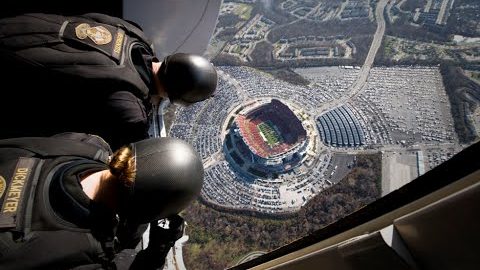 How Awesome Is This?

This isn’t for the faint of heart or those with acrophobia. But for these badass Navy SEALS, it’s just another parachute jump you know, like it’s no big deal. On April 16, 2016, members of the US Navy Parachute Team called “The Leap Frogs” kicked off a football game by jumping into the Neyland Stadium in Knoxville, Tennessee.

What can we say? These boys sure know how to make an entrance and leave everyone stunned in the process. You’re probably already well aware but this isn’t exactly the easiest job out there. It isn’t just skydiving, this group is also popular for their synchronized jumps. It’s a jaw-dropping, heart-stopping stunt that never fails to leave everyone breathless.

And you know what’s the best part here? The deafening cheer of the 67,000 football fans. That just gave us goosebumps. Imagine being part of the crowd and witnessing this kind of awesomeness before the game.

Anyone can actually invite these daredevils. And if you’re interested, all you have to do is file a “Jump Request”, provide documents and wait for approval. According to their website:

“Submit your demonstration request as far in advance as possible and at a minimum of 90 days before your event.

Demonstration requests received during our show months will be considered on an individual basis, in the event of other cancellations.

When all your documents are completed, submitted and approved, we will assign a “show scheduler” to assist you in all financial, logistical, operational and personnel matters. The show scheduler will be your direct link to the Navy Parachute Team.”

Admit it, this is perhaps the most American thing anyone has ever seen. Watching them alone makes us nervous. It’s crazy how they managed to pull this off smoothly and flawlessly. They deserve so much respect.

Not all heroes wear capes, sometimes they have parachutes on.