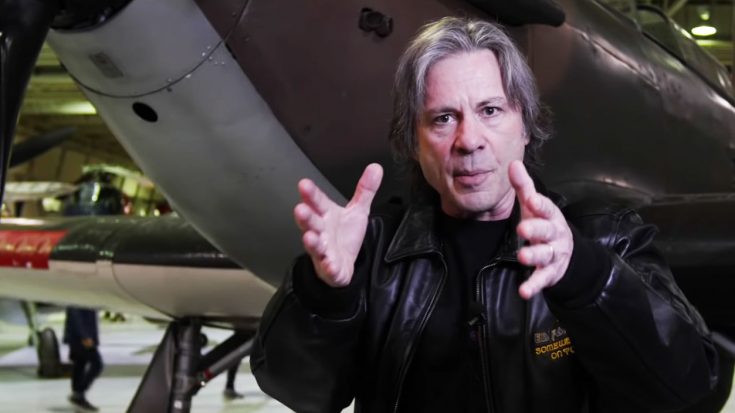 Iron Maiden’s Bruce Dickinson, an aviation enthusiast since a young age, is now involved in a video diary series about World War II aircraft. The clip below will give you a taste of what this exciting new show will bring.

Bruce Dickinson, the lead singer of the world-renowned band, Iron Maiden just got involved in another side venture which is something he’s known for. Aside from being a musician, Dickerson is also a writer, entrepreneur and a pilot, things most casual listeners don’t know about him.

When it comes to flying, he’s licensed to handle commercial airliners, separating him from weekend warrior pilots who fly tiny Cessnas. It takes about a year and a half of training and also requires you accrue 1,500 flying hours, something that takes money, skill and dedication.

After getting his license, Dickinson leased a Boeing 747-400 which he flies on Iron Maiden’s tours. He named it Ed Force One.

The series is a partnership of sorts between Dickinson and World of Warplanes, a free online game dedicated to World War II dogfighting. The game scored a 69 out of 100 on Metacritic since its inception in 2013 and hosts thousands of players who fight each other using authentic-looking aircraft from World War II.

Dickinson, born in England, has a passion for these aircraft with the Hurricane particularly striking his fancy. When he heard about the mini-series he jumped onboard, signing a contract for 10 educational clips starting with the Hurricane. The Marketing Director of Wargaming who makes World of Warplanes was quoted saying, “We are all delighted that Bruce has brought his enthusiasm and expertise to World of Warplanes with these informative videos, which he has delivered in his own inimitable style.”

The official name of the series is going to be called Bruce Dickinson Warplanes Diaries. In the upcoming months, World of Warplanes will be releasing two episodes per month, which you can watch on their facebook page.

You can find the first episode below.