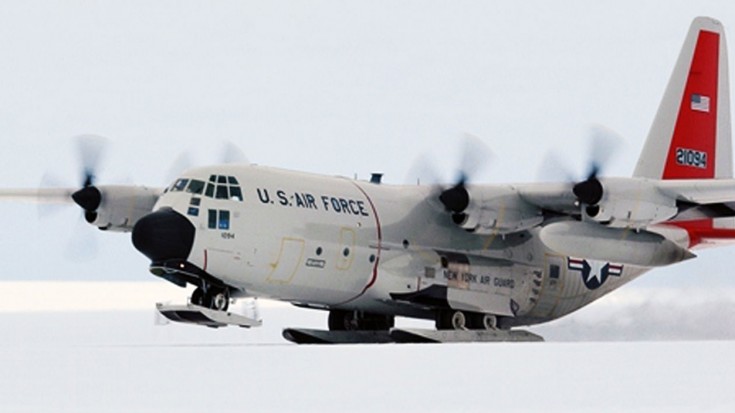 If You Didn’t Know About Those Skis, You’ll Be Amazed.

This unique footage comes to us from a little documentary about a variant of the C-130 most people don’t know about. Equipped with skis under their wheels, these big girls were adapted to landing and taking off from snow covered runways.

The Hercules aircraft were modified in 1956 to make snow operations possible. Although they’ve changed designations many times, the final variant was called the LC-130. Their primary purpose was to aid in the Navy’s Antarctic expedition that was ongoing during the 60s. Today, there are 10 such aircraft still in service in the 109th Airlift Wing of the New York Air National Guard.

“I’ve been involved in landings that I would equate to landing inside a ping pong ball.”-Jim Blakley

In this case, the crew was landing in Greenland. As this is part of a show, the music and footage was edited to make the footage more dramatic, but if you think about it, what they’re doing is no easy task.

As you’ll be able to hear from the narrator, it’s not so much that the plane will slide and bank when landing on a uneven, snowy field. The real problem lies in visibility. With everything white, features get lost and landing becomes extremely hazardous.

Watch the video to see exactly what we mean. It includes both interior and exterior shots so you’ll get an excellent look at what goes into this whole process.