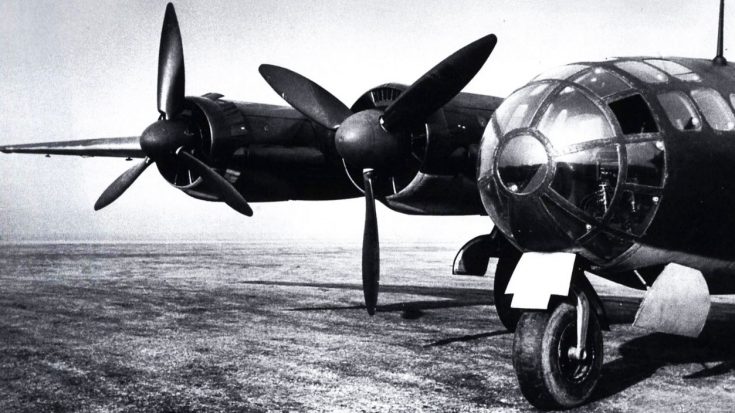 When looking at this German plane, what comes to mind? Although wing and tail configurations are different, the front screams B-29 Superfortress, doesn’t it?

What you’re looking at here is the Messerschmitt Me 264. Just like the B-29 it was a long-range strategic bomber but was built with one specific mission in mind. Nuking the United States.

Dubbed the “Amerika Bomber” by the German Air Ministry, its proposed range of almost 10,000 miles would have enabled it to be launched from airfields in Western Europe. As the war was looking favorable for the German side at that time, this project was meant to look ahead toward the next major step in the war. Flattening New York City and showing the Allies no one was safe from the Third Reich.

Three of these prototypes were built as the proof of concept but were later scrapped due to a number of minute faults. Like the Superfortress, it was difficult to handle and had an even higher wing loading. In the end, as the war started to look less favorable for the Germans, production was shifted from bombers to fighters as the Luftwaffe became more defensive.

To make things even more confusing, the B-29 Superfortress had its first flight on September 21st, 1942 while the Me 264 flew first just three months later on December 23rd. Although we didn’t find any evidence of espionage in all the research materials we have, it’d be slightly odd if that wasn’t the case. Those cockpits are too specific to not be influenced by each other, whichever way that could have gone.

If you good folks have any evidence which might suggest otherwise, shoot us a message on Facebook and we’ll gladly look into it. Either way, see the vintage footage we found of it at the bottom here. Very interesting stuff.