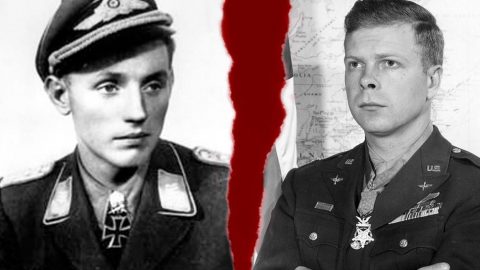 Ace Up Your Sleeve.

Germans in WWII had a reputation for killing and they were very good at it. They killed on the battlefield, the seas, in concentration camps and in the skies. German pilots maintain the record for most kills while only one non-German ranked within the top 150 Aces of WWII. So why do Germans have kills numbering in the hundreds as opposed to the Allies with maybe a few dozen?

Gunther Rall the 3rd most successful WWII ace spoke up about the issue and why this occurs. During later stages of the war, battles shifted from air to land and many Allied pilots never encountered German aircraft. Lack of viable targets kept kills low for Allied pilots, however, another major factor allowed for higher German kill counts.

“Because the Germans to a certain degree could decide when and where to engage the Allied aircraft, particularly when they were attacking Germany and their occupied territories. Thus, tactical victories were still common and those improved the kill count of German pilots. The next point mentioned by Gunther Rall is that western Allied pilots usually had a limited number of missions to fly and they rotated out or could return home.”

With fewer pilots in their ranks phasing out after a few missions was not an option for the Germans. The Allies did not have many opportunities to gain kill numbers, while Germans were kept in service until they died.

There were skilled pilots on both sides and given the opportunity the Allies may have caught up to the Germans. Military History Visualized discusses these factors and several other aspects of WWII aviation to in this enlightening video.