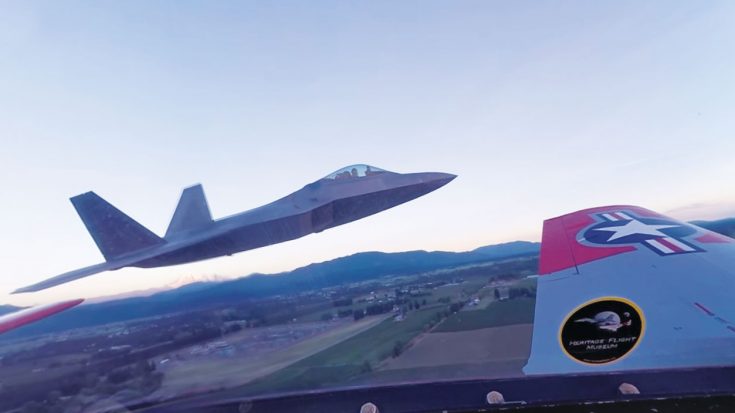 Now That Is Pretty Neat.

This really great video was brought to us by the Heritage Flight Foundation. During 2015’s Abbotsford International Air Show, spectators were treated to a formation unlike any other. The P-51D Mustang called “Val-Halla” was joined by Air Combat Command’s F-22 Raptor. Flying really close to each other, the contrast between the two planes and how far aviation has come is eye opening.

The cool part of this video is the perspective. The camera, cameras actually, are in the back of the P-51. That’s where the whole 360 thing comes in. For those of you who are not familiar with it, let us explain it to you really quickly.

360 videos came out about a year ago. It’s basically a couple of cameras arranged in a circle that take footage from every perspective. That footage is then put into a software which edits it into one solid piece. Now integrated with mobile devices and computers, it allows the viewer to see everything around them as if they were there.

Here’s what you folks have to do. If you’re viewing this on your computer, click and drag your mouse over the video to look around. If you’re on a mobile device such as an Iphone or Samsung, you can simply hold up your phone and turn it in any direction to see what’s there. How neat is that?