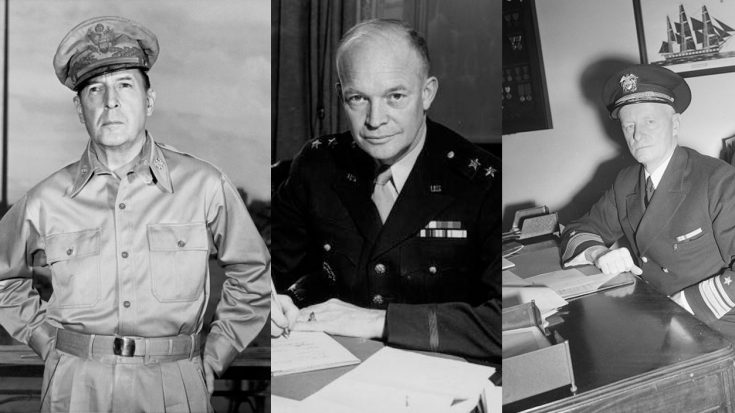 In August of 1945, the United States dropped atomic bombs on the cities of Hiroshima and Nagasaki. The attacks killed over 100,000 people laid waste to the cities and motivated Imperial Japan towards a surrender. The bombings remain controversial to this day, but many are unaware that several of the top US military leaders were not in favor of their use.

The atomic bombs dropped on Japan were effective, but there were many who opposed their destructive power. In fact, many of the top United States military officials voiced opposition to the use of the atomic bombs.  These men included General Dwight Eisenhower, Admiral William Leahy, Herbert Hoover, General Douglas MacArthur, Admiral Chester Nimitz and General Henry Arnold just to name a few.

“It is my opinion that the use of this barbarous weapon at Hiroshima and Nagasaki was of no material assistance in our war against Japan. The Japanese were already defeated and ready to surrender because of the effective sea blockade and the successful bombing with conventional weapons.”

At this point in time, Allied Forces had overtaken most of Japan’s island territories and the mainland was surrounded by naval vessels cutting off supplies. Imperial Japan was on the verge of collapse, its armies failing, civilians starving and their economy falling under. A surrender from Imperial Japan was inevitable but the United States chose to use atomic bombs twice, much to the dismay of their military leaders.

“The Japanese were ready to surrender and it wasn’t necessary to hit them with that awful thing.”

It is hard to deny that the effect of the bombs had a significant impact in shortening the war. President Truman made the tough call despite the opposition because an invasion of the Japanese mainland would have resulted in millions of deaths. However, the military leadership was well aware that they had beaten Japan and found it inhumane to use a weapon against a fallen enemy. The ethics of the atomic bomb are discussed in detail in the following video clip.