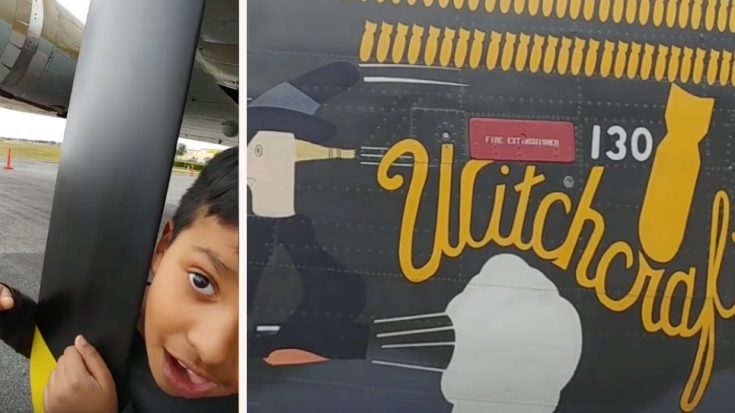 Here’s the adorable things she had to say about the “Witchcraft,” “Nine Oh Nine,” and “Toulouse Nuts:”

After commenting on how long the lines are to get into each plane, the young girl climbs up into the Witchcraft. She proceeds to give a tour to her YouTube audience with confidence, quickly overviewing of the B-24 Liberator’s key features like the very narrow bridge, oxygen tanks, and the “shooter thing.”

Pointing the camera at the No Smoking In Bomb Bay sign, she exclaims:  “That was probably there from a really long time ago cuz I doubt the bombs actually work to this day.”

Hopefully she also learned that she just stepped into the only flying B-24J in the world. Restored by the Collings Foundation in Stowe, MA, it’s definitely one special plane.

Next, our future aviation specialist braves the line to step foot on the Nine-Oh-Nine, which actually took its nickname from the last 3 digits of its serial number (not nearly as creative as so many others).

You’ve got to chuckle when she zooms in on a blanket and matter-of-factly states, “They had blankets, of course, cuz I guess it would get cold.”

Then, there’s the bomb. She doesn’t seem fully convinced that it isn’t real. “Guys, that’s a bomb. It’s a model, I think. It doesn’t explode…So, Hitler would find it, and then it would explode.”

Nine-O-Nine served with the 323rd Bomb Squadron, 91st Bomb group, incredibly completing 140 combat missions without loss to its crews. She did suffer two civilian crashes however, once in 1987 and once in 1995.

Finally, the young YouTuber points her camera at the departing Mustang. “There is the Toulouse Nuts flying. I know that sounded really wrong, but believe me, that’s what the plane is called.”

This unique variant Mustang with a dual cockpit and a bubble canopy got its punny name when someone commented that its pilots, of the West Virginia Air Guard’s 167th Fighter Squadron, were “two loose nuts behind the wheel.”

Luckily for this situation, that’s pretty mellow compared to a lot of the names out there!

You can see the cute tour in its entirety in the video below.