Carrier Night Landing Is The Most FRIGHTENING USN Operation Ever 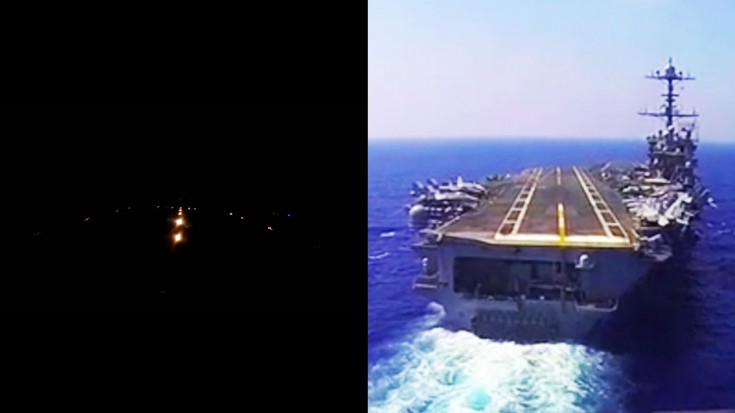 Your Hands Will Get Sweaty Just Watching This.

This awesome video was made by a Youtuber who got inspired by a side-by-side surgical video. Seeing the difference and comparison of the two shots, he decided to make the same video for what he loves, namely, aviation.

Most of you know the differences between being a pilot who lands on airstrips and aviators who land on aircraft carriers. As some put it, “it’s like landing on a postage stamp in the middle of a pool.”

When landing at night, you trust your training, skill and instruments. That’s it!

Not only that, aircraft carriers move as you can imagine. You have the constant swaying and pitching of the vessel as you’re trying to battle ocean winds and catch an invisible cable with a hook in the back of your plane. Sounds treacherous we know, and it absolutely is.

Now coming back to the video this guy made, it features yet another (and most dangerous) aspect of being a Navy aviator. That is landing at night of course. All the afore mentioned hazards are there as well, but you can barely see anything. Yes, the deck is illuminated by little lights but when you watch this video, you’ll see what a crazy breed these guys really are. Major respect.