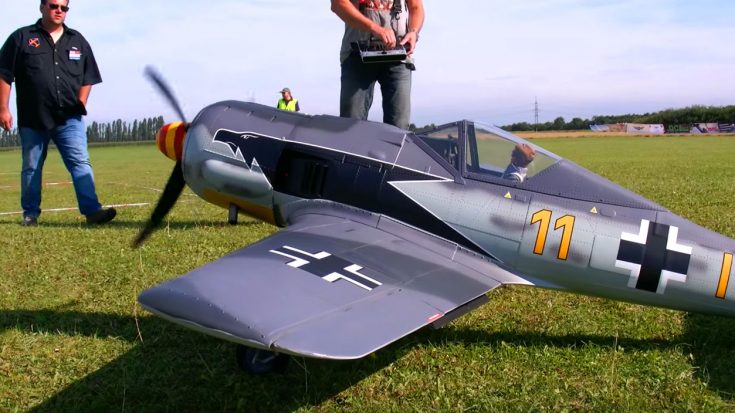 The Focke-Wulf Fw 190 was in many ways the workhorse of the German Luftwaffe during WWII. This nimble fighter plane had a track record of success that rivaled the Messerschmitt Bf 109, but pilots who had flown both preferred the Fw 190. A reliable fighter and thorn in the side of the United States Army Air Force but it also makes for a great RC model plane.

“During World War II, few sights could make an Allied pilot’s blood run cold like that of a Focke-Wulf 190 headed his way. So fearsome was this fighter’s reputation that it was known to friend and foe alike as the “Butcher Bird.” In the hands of Luftwaffe aces like Kurt Bühligen, it was practically invincible.”

Euroflugtage in Rheidt is a great place to see remote-controlled aircraft soaring with the most enthusiastic pilots. To see this recreation of the WWII history brought to life and soaring through the sky is a source of sheer delight. Do yourselves a favor and see this phenomenal RC Focke-Wulf 190 as it gears into action at the Euroflugtage in Rheidt.