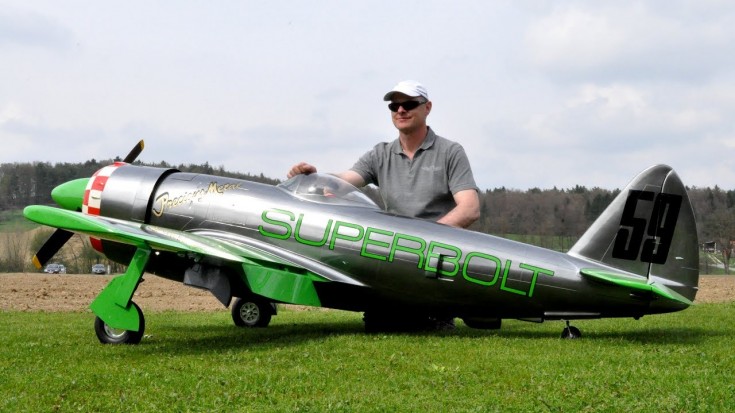 If You’re Going To Do Something, You Might As Well Do It All The Way

This 1/4th scale P-47 Superbolt is truly one of a kind. Weighing 83 pounds with a wingspan of over 9 feet, this is one Rc you’ll want to see takeoff. To make this massive Rc warbird even better, it’s powered by a 400cc, 5 cylinder radial engine. This makes it sound pretty much like a 1/4 scale Pratt & Whitney R-2800. It’s rough, it’s throaty and we absolutely love it.

The term Superbolt was used by World War II pilots to describe a Thunderbolt that had a bubble canopy.

Often nicknamed ‘Jug’ due to its stout appearance, the P-47 has a special place in history. Armed with eight .50 caliber machine guns and able to carry up to 2,500 lbs. of bombs, these warbirds were meant to do business. They were used as fighter-bombers and ground attack aircraft to support troops on the ground, so both pilots and ground troops loved them equally. Because of their armament, the only people not to like them were the enemy!