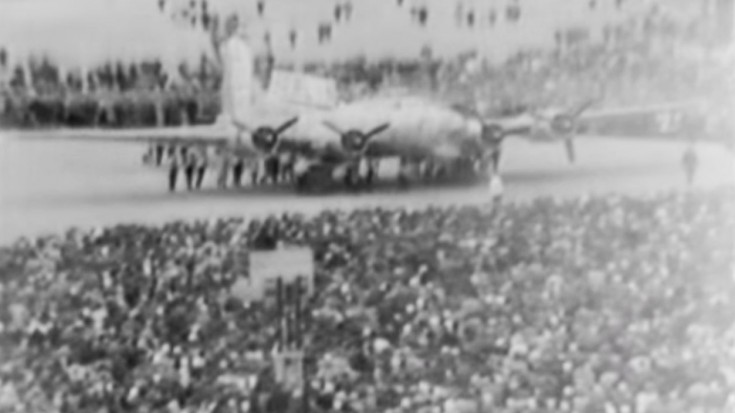 B-17 Plants Worked Round The Clock For Five Years

B-17 Flying Fortresses, one of the most iconic aircraft of World War II, was built continuously from 1940 to 1945 while the war was raging. During their production, 12,731 B-17s were manufactured and in this newsreel you’ll see the last and final one roll out of Boeing’s factory floor. Over 30,000 people gathered for the event at Boeing’s Plant 2 in Seattle to witness the event. The newscaster explains that after that, the factory will be devoted exclusively to making their latest design, the B-29 Superfortress.

In the 1930s, Boeing, Douglas and Martin were competing for a contract to built a new bomber for the United States Army Air Corps.

It was exactly on August 8th 1934 that the USAAC sent out a proposal for a new, more effective multi-engine bomber. They required that the new design would be able to effectively bomb targets from an altitude of 10,000 ft, fly for at least ten hours with at speed of 200 mph or more. What Boeing gave them surpassed all their expectations and more. Building the first prototype and designating it Model 299, Boeing funded the whole project as they were confident the USAAC will accept their proposal. They were right.