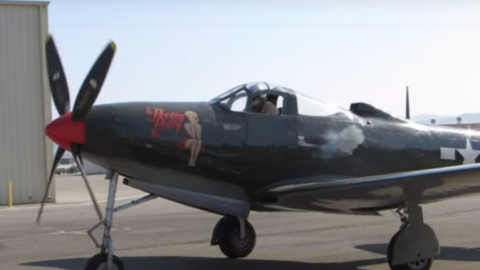 The Bell P-63 Kingcobra is among one of the oddest fighters of World War II. It is strange because it is an American plane that was not used by the United States Army Air Forces. The P-63 was made in the United States and exported to the Soviet Union for use in their air force.

In Russia, it settled into a role as a ground attack fighter using the cannon in its nose against enemy troops. Over 3,000 Kingcobras were built but only a small handful survive, most of them on static displays in museums. Fortunately, the Palm Springs Air Museum is home to one of the four airworthy P-63s, the legendary Pretty Polly.

“Pretty Polly is one of a small handful of P-63s in the world. Her mid-engine design allowed for a 37mm cannon to be located in the nose along with two .50 caliber machine guns for devastating firepower. Her Allison V-12 engine has a remarkable sound when it passes overhead.”

Every so often they bring out Pretty Polly so the fans can hear her engine and watch her zip up into the sky. Check out this clip where the Planes of Fame Museum’s pilot John Maloney shows that Polly still has still has some fight left in her in this clip.