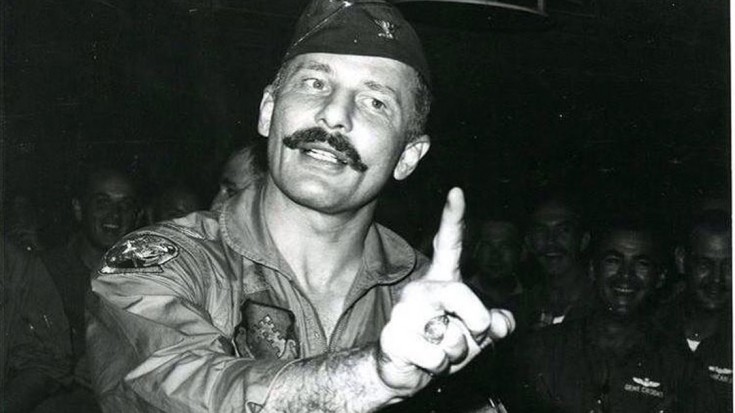 It Only Takes A Minute For Him To Explain Whether Or Not You’re Cut Out For This.

Robin Olds’ only claim to fame is hardly his handlebar mustache, although that’s sometimes the first thing that comes to mind. He’s is one of the finest aviators the world has ever seen, an ace three times over in two wars. Fighting both in World War II and Vietnam, he got 17 kills to his name. All in all, he’s the guy you didn’t want to dogfight against.

Olds flew the P-38 in the European Theater before transitioning to the P-51 later in the war.

Along the lines of what Olds talks about in this interview, he speaks from experience. During a B-17 escort mission on August 25th, 1944, his four-plane squadron encountered a formation of 50 or so Bf-109s heading their way. Staring death right in the face, he ordered his squad to climb higher and surprise attack the enemy. That choice could have only been made by a man with the biggest you know whats in the world. During the fight, Olds shot down four Bf 109s, including one while gliding when his engines died as he forgot to engage internal fuel tanks. This is just one of many stories brought to you by handle mustache bearing Robin Olds.

Check out this video to see what he has to say about being a fighter pilot. It’s simple, yes, however put together you need to be that type of person combined to truly excel at this.