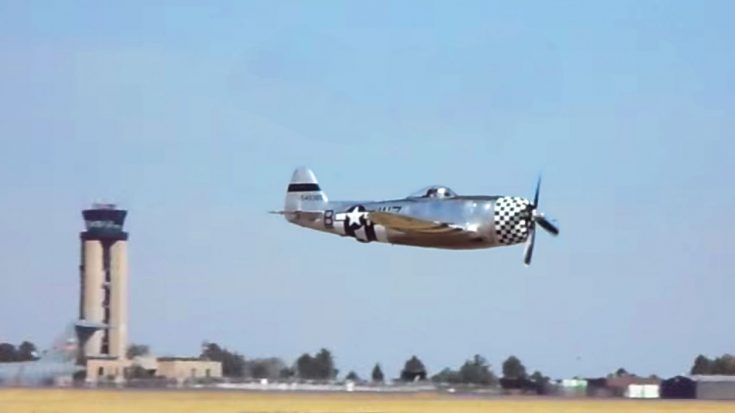 This is not the typical flyby we show you folks. We usually find and share either fast flybys that are close to the ground or really low ones. Also, anytime the pilot banks the airplane over the crowd is always a good watch. What we’re saying is that we love to show you exciting stuff.

This is not one of those, but it is really beautiful however.

This P-47 Thunderbolt just comes into screen from the left and makes a nice, slow pass. The sound cuts in halfway through just enough to let you hear that nice, throaty radial. It’s really a great thing to witness.

The P-47 Thunderbolt could carry up to 2,500 lbs. of bombs. That’s half the payload of a B-17 Flying Fortress depending on the lenght of the mission.

As for the bird, we tracked her down through her tail number. She was built in July of 1945 but missed fighting in the war. She was then transferred to the Peruvian Air Force where she remained from 1953 to 1963. She changed hands over the next few decades quite a bit until she crash-landed in Arizona in 1990.

She was then rebuilt in Chino, California and flew again in 1995.