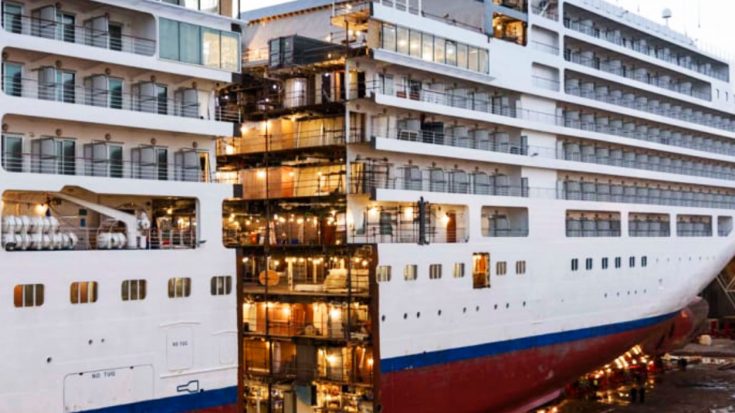 This Was The Most Extreme Cruise Ship ‘Makeover’ Ever Attempted.

The Silver Spirit is a luxury cruise ship operated by a Monacan company called Silversea Cruises. After a year of construction, Silver Spirit was launched in 2009 and has served faithfully ever since. Offering cruises around the world to exotic places such as Africa and the Mediterranean, she also offers a 91-day cruise package which can take you around the world. These packages cost anywhere from $5,000 to $20,000 U.S.D. making this a very profitable business.

The cost of the renovation is estimated at about $70 million U.S.D.

The company did, however, figure out how to make a bit more money but cutting her in half.

Hailed to be one of the most ambitious ship retrofits of all time, Silversea Cruises built a whole new midsection of the ship off-site and after cutting Silver Spirit in half, connected the three sections to add more space.

This only took crews 2 months to accomplish and increased the length of the ship from 195.8 to 210.7 meters, or roughly by 50 feet. Although you might initially think that’s not a lot of footage for the effort, think about this.

The new section will be home to new amenities such as restaurants and a gym, it will also add 12% more passengers increasing its capacity from 540 to 608 guests. At an average price of $12,000 per passenger, this will bring in over $800,000 more per voyage.

Watch the video below to see exactly what went into this project. The numbers presented are really impressive.