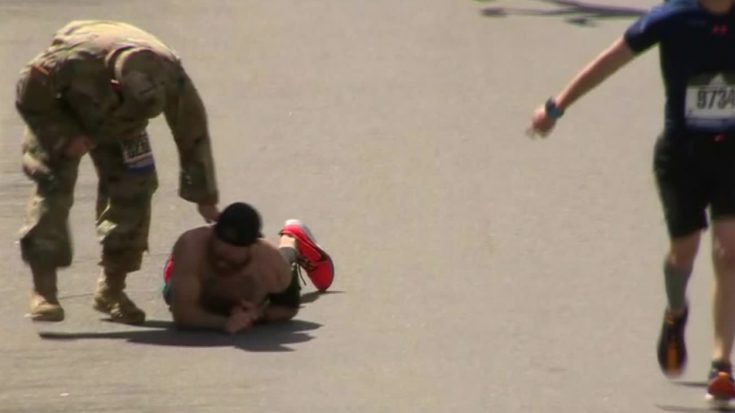 These three names repeated in Ohio Marine veteran Micah Herndon’s head as he fell to his knees in shocking pain during the Boston marathon over the weekend. It was mile 22.

The Boston Marathon is 26 miles. Micah Herndon dragged his wasted legs the last four miles, unassisted, to complete the race. It was excruciating.

He did it for, and because of, those three men, whose names he also wore on his laces.

Juarez, Ballard, and Hamer were Herndon’s close friends and comrades in Afghanistan in 2010. All three of them were lost at once from an explosion while traveling in a convoy.

Devastated by their loss, Mark used running as a way to deal with his grief.

“I run in honor of them. They are not here anymore. I am here, and I am able. I am lucky to still have all my limbs. I can still be active. I find fuel in the simple idea that I can run. Some cannot.

“If I get a heat cramp while running or my feet hurt or I am getting exhausted, I just keep saying their names out loud to myself. They went through much worse, so I run for them and their families.” – Micah Herndon

Of course, crawling on hands and knees isn’t exactly how Herndon expected to finish the race. But quitting was never an option for this determined Marine, not with those names in his head. His fallen brothers would be proud.

Check out the hair raising clip below of Herndon completing the marathon in 3 hours and 38 minutes.

Also, we would just like to remind everyone that there’s no such thing as a former Marine.

Micah Herndon, Semper Fi !!! There is no such thing as a former Marine. pic.twitter.com/Quatz4mDJW