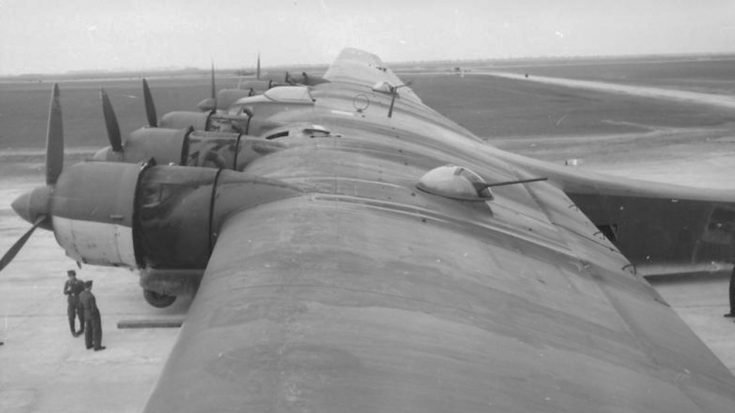 When it comes to big WWII planes the first one that comes to mind is usually the B-29 Superfortress but there was a bigger plane. With a tremendous wingspan of 181 feet, 40 feet longer than the B-29 the Messerschmidt Me 323 was the biggest plane of WWII.

Designed from a converted military glider the Messerschmitt Me 321, the Me 323 came from a need to transport heavy vehicles to German troops in need support through Allied control areas. It had six powerful engines attached to it in order to gain lift at a maximum weight of 40 tons.

They were originally intended for use in a German invasion of Britain, but that was canceled after the Royal Air Force proved to be too strong. Instead, Me 323s took transported combat vehicles to Tunisian campaign in North Africa because it was too risky to dispatch ships through the Mediterranean.

“Their cargo capacity, rated at 15 tons, was great; in terms of heavy equipment, they were each capable of carrying either two four-ton trucks or an 88-millimeter Flak gun with its entire compliment of equipment, ammunition, and gun crew. The heavy cargo capacity sometimes strained the six engines, thus they were sometimes equipped with four rockets to assist with takeoffs”

These giant aircraft were effective for transporting large military vehicles and up to 130 troops, however, their slow speed, lack of weapons and large size made them easy prey for Allied fighters. This film shows a brief history of the Messerschmitt Me 323 and in flight after a heavy cargo loading.