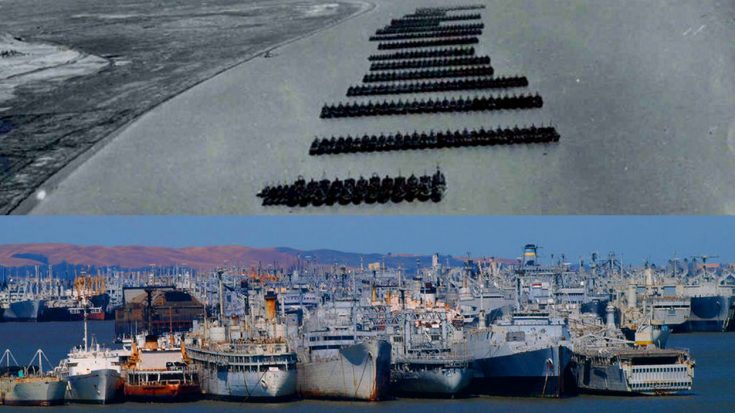 Following the end of World War II, the world knew peace. However, in the event of another conflict, the United States had to be ready. In response, the United States Navy created a massive fleet composed of dozens of vessels, yet they were never touched. Now after more than 70 years of waiting, these ships finally getting a new purpose after a somewhat controversial life.

Some call it The Ghost Fleet or Mothball Fleet but officially it is known as the Reserve Fleet. There are four reserve fleets in the waters around the United States built from retired naval vessels should they be needed in a conflict. Otherwise, the reserve fleets shipyards act like a retirement home for ships that have seen better days allowing them to rust in peace. But now all of that is changing as these ships face a permanent retirement after sitting around for over 70 years.

Since 1946, the Reserve Fleet of Suisun Bay off the coast of California has been slowly contaminating the water with toxic elements. The ships are vastly outdated and environmentalists are taking notice of the damage they are doing to the ocean. Over 20 tons of lead paint chips have fallen into the waters and causing a noticeable deterioration of the area.

“You could hear the crunch of the paint chips or the metal under your feet as you were walking across the decks of the ships.”

Over the past seven years, 57 ships have been taken away from the towards recycling plants. The last of these legendary warships will soon be gone from Suisun Bay. Here is a clip from the early 1990s which demonstrates just how many ships were once in the Ghost Fleet.