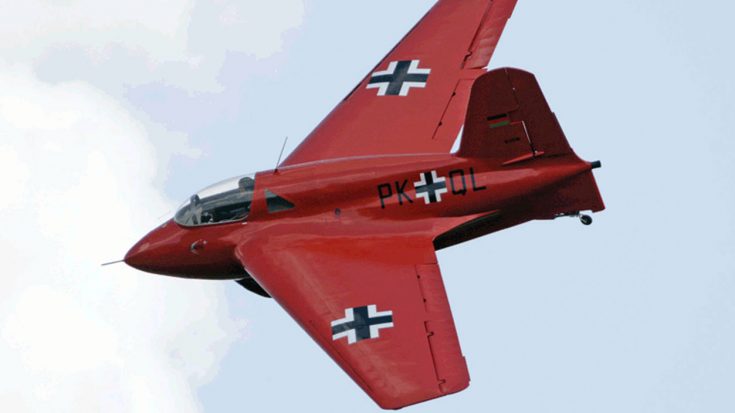 In the final years of World War II as the Nazis faced greater opposition, they began to intensify their efforts. German scientists would create powerful weapons of war such as the V-2 Rocket and some of the first jet fighters. These efforts were futile as the Axis Powers had fallen too far as Allied troops pressed ahead. Had these weapons fallen into the hands of the Germans years earlier the war may have a different outcome. German scientists would create aircraft out of desperation but they soon proved to be innovation, especially the Me 163 Komet.

“The new Messerschmitt design would utilize the chemical explosion to power the small fighter at break-neck speeds – able to outfly any bomber formation escort fighters with ease.”

From the mind of Alexander Lippisch, the Messerschmitt Me 163 Komet was among the first rocket fighter aircraft. Reaching speeds of 659 mph while climbing 31,500 feet per minute the Komet served as an interceptor for enemy planes. The Me 163 had great strengths as an interceptor, but it was not without weaknesses.

Serving as a short-range fighter it could only travel within 25 miles, awaiting enemy attack rather than seeking it out. Weaponry proved problematic as the Me 163 moved at speeds so fast pinning a target was difficult. The rocket fighter did not have an engine, it was able to rapidly gain altitude but without control on its descent. The Komet would have to function as a glider after its short although it left at the mercy of enemies. Many pilots would suffer injury or death upon landing due to the unreliable landing gear.

Germany would produce only 370 units of the Me 163 making it the only mass-production rocket fighter in history. A success and a failure it was a deadly deterrent for fighters and would pave the way for rocket aircraft. Explore deeper into this combat footage of the Me 163 Komet.