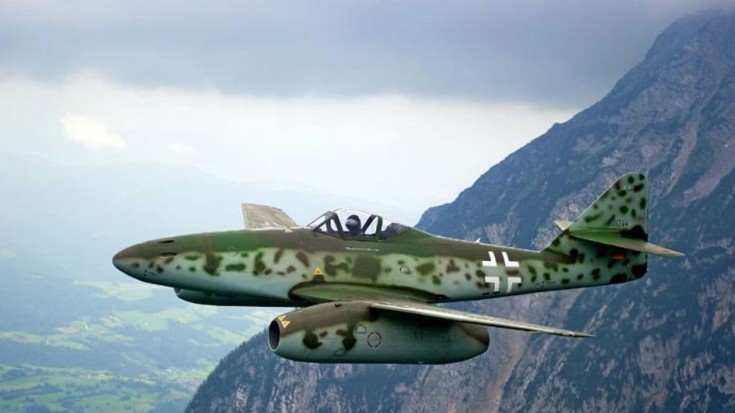 Pretty Scary If You Think About It.

Anyone can play the game of “what ifs” in retrospect, but sometimes it’s just fun to speculate. For this piece, we’ve rummaged through a lot of paperwork and put some pieces together to allow for this storyline.

The simple question we posed was, “what if Me 262s were introduced a year or two earlier?” This question is not that far fetched if you think about it, as the jets were ready earlier than their introduction into battle in April 1944.

It was Hitler who was (luckily) stubborn and wanted to use them as bombers instead of the fighters like his command was pushing for. If we change this fact, here’s what we might be looking at today.

Air superiority was key to winning World War II, as countries were basically bombed into submission and the introduction of the Me-262s would have had a heavy impact on those efforts. Lets see if you agree.

Topping out at 559 mph, it creamed any other Allied plane out there. Mustangs for example had a top speed of 437 mph, so imagine pushing your fighter at top speed and being passed by this green thing faster than you can say, “oh crap!”

2. Pilots Were BEST Of The Best

The pilots chosen for training were the cream of the crop. Aces such as Major Walter Nowotny (pictured) trained other aces and the best pilots from squadrons that were grounded due to lack of fuel at the time. Putting a battle hardened pilot into the fastest plane in the world sure makes for a great adversary.

Luftwaffe’s newest invention in 1944 were R4M rockets. Small but deadly, Me-262 pilots quickly found out they could down a bomber with 1 or 2 hits as opposed to the 20 it took previously using cannons. Let that sink in for a bit.

During their short service, they produced a staggering total of 14 aces, Kurt Welter himself having over 20 victories to his name. This of course was in addition to the other kills these pilots had, some reaching far over 200.

Now imagine what a full squadron could do multiplied by 100 if not 1000 if they were put into production earlier. The limited production of these planes was due to the round the clock bombardment of Germany. With factories and plants destroyed, it was hard to make more Me-262s, but had they been introduced prior to the raids, the bombings would have not been nearly as effective.

6. At The End Of The Day, Pilots Are Human

There is only so much you can do in terms of morale. Sure, some pilots managed to shoot down a few Me-262s, but going after a plane you can barely see and can’t catch up with would take a toll on your mentality, especially when everything around you is blowing up and you’re not sure where it came from.

7. Nothing Would Be Right After That

This might look scary/funny, but being faced with a myriad of insanely superior fighters might have turned the entire tide of the war. Just a year would have made all the difference, but at the end of the day, there was one more ace up Allied sleeves…

Although it’s fun to extrapolate a bit sometimes, we feel like all the points above are valid in assuming Me-262s would have won the skies. If that was the case however, the United States would have resorted to the one thing Me-262s couldn’t outfly.