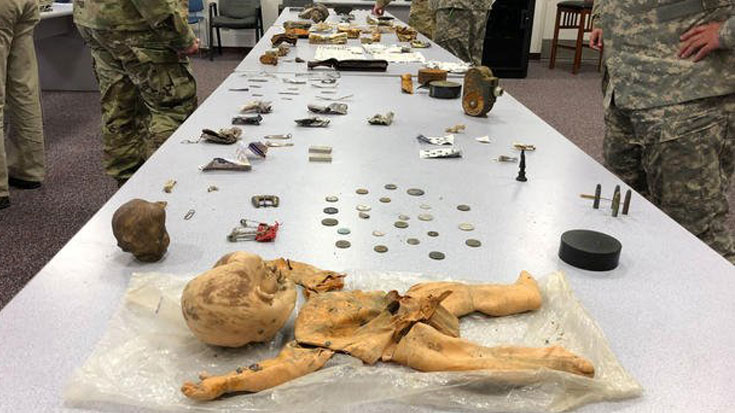 On Nov. 22, 1952, a Douglas C-124 Globemaster II departed from McChord Air Force Base toward another base in Alaska. Sadly, that flight never completed its journey as it fell into the frozen mountains with all 52 passengers aboard. In the 66 years since the crash, the glaciers have receded and remains of the lost crew have begun to emerge.

In 2012 additional remains from lost crewmen were found and expedition teams venture out every June to search for more bodies and lost artifacts. So far the bodies of 38 fallen soldiers have been found among the glaciers. Genetic testing has revealed the identities of the frozen bodies to return them families for proper burial. The glacial terrain makes the search difficult and bad weather doesn’t help, hence searching in summer months.

“To find three in one year like this was just surprising. When you’re on your hands and knees and you’re searching through millions of rocks on a glacier and you come across a ring it’s really exciting. It’s the smallest thing that we can maybe associate with someone.”

At this point, it is a race against time, what is revealed by melting glaciers and what the crews can discover at the right moment. The search continues and will continue until the remains of the last 14 crewmen are found.